The Social Forestry wing of the Forest Department in Surpur and Hunsagi Range has aimed to raise 1.29 lakh saplings of different varieties to be distributed among the general public, farmers and government authorities to plant them to ensure more greenery and also, protect the environment effectively.

Officers in different capacities in the Social Forestry wing and Chief Executive Officer of Yadgir Zilla Panchayat Shilpa Sharma have jointly made the efforts to choose the different varieties of saplings.

At present, 89,000 saplings of different varities of Beech, Neem, Curry, Mahagoni, Syzygium cumini, Taapsee, Peltophorum, Caesalpinia pulcherrima, Shirasala, Melia Dubia, Sandalwood, Tamarind, Bangal and Pear, which are in different stages of growth, have been raised at a nursery centre in Hunsagi and Mallibhavi village near Surpur city. They have been provided with the necessary compost and water at the required quantum.

“We will supply saplings under Raising of Seedlings for Public Distribution (RSPD) Scheme to farmers and the general public at subsidised rates to plant them in their non-agricultural land,” Range Forest Officer Somaraya D.G. told The Hindu.

The department has also planned to take up a plantation drive along key roads through labour who have registered themselves in gram panchayats under the Mahatma Gandhi National Rural Employment Guarantee Act (MGNREGA).

“We have also planned to supply saplings to authorities to plant them on the premises of schools, hostels, hospitals, particularly primary health centres, and hillocks,” Mr. Somaraya said.

Last year, the Social Forestry wing raised 40,000 saplings in Hunsagi and Surpur taluk. It was less compared to this year’s target as it was hit by insufficient rainfall.

The Zilla Panchayat has planned to distribute saplings, under MGNREGA scheme, to be planted maintaining distance between two plants as specified on fields that are formed with bunds. “We will distribute saplings to farmers to take up plantation under the Badu Besaya Scheme to protect bunds from breaching and washing away during the rainy season. It will also help keep moisture in soil and recharge groundwater,” Ms. Shilpa Sharama told The Hindu.

She said that plants such as drumstick will be distributed to houses where there are pregnant woman to help increase nutrition level among them.

The Social Forestry wing is keen not only on raising plants but is also working to protect the environment and help farmers to take up plantations of different varities of nursery to protect bunds and fields from overflowing rainwater. 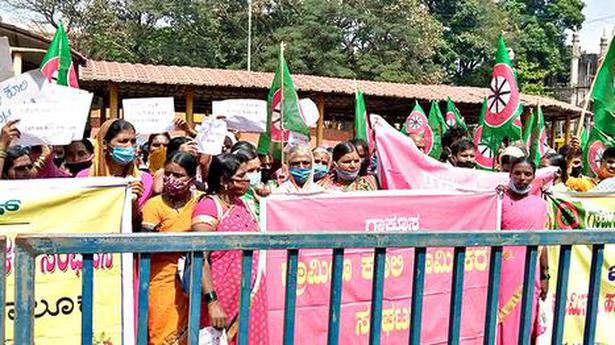