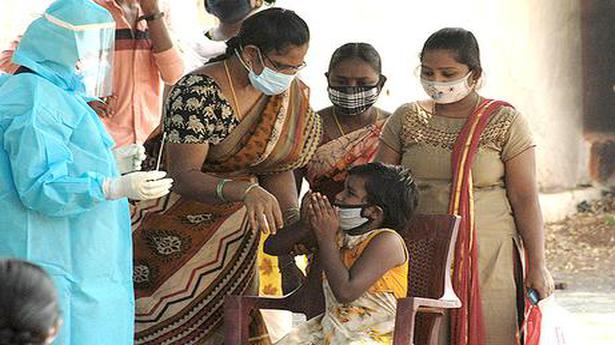 
The recoveries of COVID-19 patients outnumbered the fresh admissions to the hospitals in south coastal districts of Prakasam and Nellore districts in the last 24 hours.

Prakasam district recorded zero deaths, while Nellore district registered one death, taking the toll to 489, a health bulletin issued by the State government said on Thursday night. The toll remained static at 575 in Prakasam . Till date, 1,064 patients have succumbed to the coronavirus in the south coastal Andhra Pradesh. The number of patients who were recovered outnumbered the fresh admissions into hospitals by 83 in the last 24 hours. With 179 new cases, the cumulative confirmed cases rose to 1,22, 042 in the region. The active cases declined to 2,254 as 262 patients recovered from the illness during the period.

The recovery rate in the region improved further to 97.70% . More than double the number of patients got cured in Prakasam district. As many as 88 persons tested positive during the period, taking the cumulative confirmed cases to 60,777. Health officials heaved a sigh of relief as 193 patients were discharged from hospitals. So far, 59,390 patients have been cured in the district. The total number of positive cases increased to 62,265 as 91 persons tested positive in Nellore district in the last 24 hours. The active cases remained at a manageable 1,442 as 69 patients recovered during the period.

Meanwhile, the district administration warned the private hospitals of punitive action if they collected more than the fees prescribed for COVID-19 testing.They have been told to display the fees for various lab tests on their premises without fail.

Holding a meeting with the principals of educational institutions, Prakasam Collector Pola Bhaskar asked them to follow the standard operating procedures (SOP) issued by the Higher Education Department.

OPD, emergency medical services to be up in 10 days