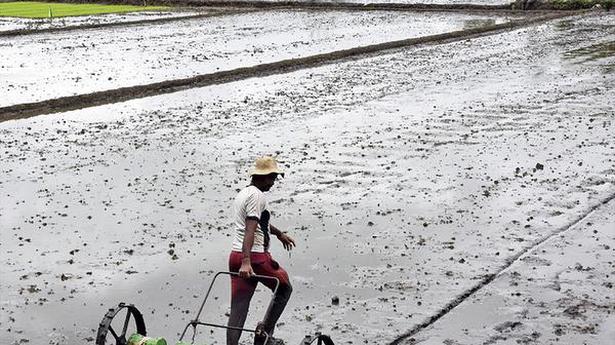 
The State’s overall sowing is higher this year compared to the same period last year with more than 44.18 lakh hectares under cultivation.

This is higher than the normal coverage of 39.06 lakh hectares that is brought under cultivation.

The statistics, updated till July 9, 2020, indicates that the actual area sown was 5.11 lakh hectares more than what is normally sown for the period, according to the Karnataka State Natural Disaster Monitoring Centre (KSNDMC).

The eight districts where sowing was between 75% to 100% of the target fixed including Mysuru, Chamarajanagar, Davanagere, Shivamogga, Chikkamagaluru, and Raichur etc.

According to the department, the area sown during the current year is more than the last year’s coverage for all the major crops so far.

The sowing and the thrust in agricultural activities has been attributed to adequate rainfall so far across the State. However, the water levels at the major reservoirs present a different picture. In KRS, the storage level is less than the average of the last 10 years for the period though the levels at Harangi, Hemavathi and Kabini reservoirs are more as on July 15, according to KSNDMC.