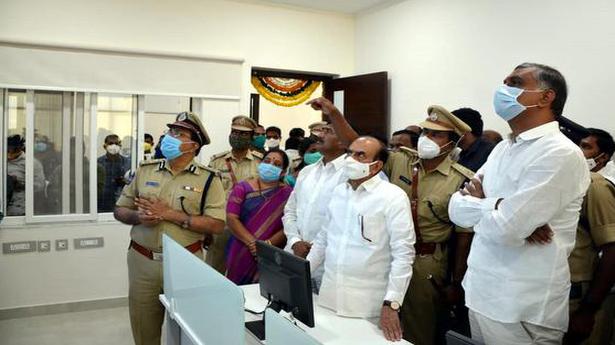 
Finance Minister T. Harish Rao said that the Telangana government has been according top priority to policing and all facilities are being provided to them so that they can perform duty without any problem.

Addressing a gathering after inaugurating the Murkook Police Station in the mandal headquarters, constructed at an estimated cost of ₹ 14.5 crore, along with Home Minister Mahmood Ali on Friday, Mr. Harish Rao said that Telangana stood top in the country in maintaining law and order and crime rate is being reduced.

“Several police stations in Hyderabad and others places have got ISO certificates for their performance extending best services. More than 6.5 lakh cameras have been set up in Hyderabad and we are top in the country,” he said, adding that even the Centre has suggested to other State governments to extend similar services. He said that because of proper law and order companies like Amazon have been been coming and investing in Hyderabad

Mr. Mahmood Ali said that Dial 100 is acting very fast and the police teams were reaching the spot within five of receiving a call and implementing friendly policing.