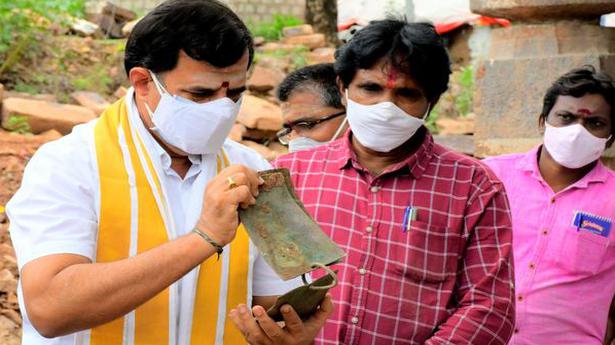 Bhramarambha Mallikarjuna Swamy Devasthanam Executive Officer Karanam S. Rama Rao has refuted the allegations levelled by BJP State president Somu Veerraju on the Endowments Department and the officials managing the Srisailam temple affairs that only two persons belonging to Muslim community was conducting commercial activity in the temple complex area, saying the matter is in the Supreme Court.

As per the Section 13 of the A.P. Endowments Act, only Hindus should be allowed to conduct all types of activity on temple premises, but two persons —Razak and Rafi—were having shop leases. When they were served notices to end the lease, they moved the Andhra Pradesh High Court which rejected their plea last year, the EO said.

“Following the High Court order, we served notices on them and sought possession of the shops. But, they approached the Supreme Court. One hearing was held and it has been adjourned. So the Endowments Department is in no way compromising the rights of the Hindus and we are following the law in letter and spirit,” Mr. Rama Rao told The Hindu.

Allegations that Muslims were removing the Siva Lingams from the Ganta Matham was also false, he said.

“Mr. Razak was present there as a contractor during some renovation work that started in 2017. No puja was performed to any deity or Siva Lingam at the Ganta Matham. Some treasure hunters removed them. Some sadhus got the repairs done as per their convenience. Now, we have taken up the restoration work and are following all norms and protecting whatever is found there,” he said.

Auctions for the new shopping complex were also conducted. Some locals moved the High Court, which asked the temple authorities to conduct the auction and submit records and that the court would make the final decision. Hence, there was no way the Endowments Department was stopping the Hindus from getting the new shops, he clarified.

Regarding the houses given in the temple complex, the EO said during the Chief Ministerial tenure of N.T. Rama Rao, some people were given house site pattas in 25 acres in Kothapeta, which is close to the temple. However, the majority of the others (from other religions) had settled there for the past 30 to 40 years and many lands were under encroachment.

Housing Minister Cherukuvada Sriranganadha Raju, who visited Srisailam on Monday promised houses to those who have been given pattas in Sundipenta.