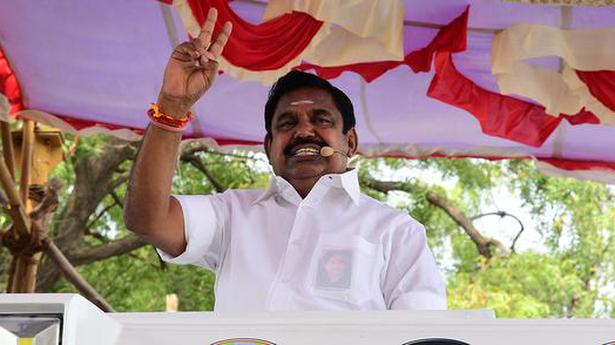 
AIADMK co-coordinator and Chief Minister Edappadi K. Palaniswami on Thursday alleged that DMK president M.K. Stalin had adopted corrupt strategies to pull down the government and become the Chief Minister through the back door.

Addressing an election meeting at Paavoorchathram in Tenkasi district, he said that after Jayalalithaa died, Mr. Stalin predicted that his government would collapse within a month. But his government proved his prediction false “with the people’s backing”. Several conspiracies were hatched by his political adversaries, but they were thwarted, again “with the overwhelming support of people”.

He said Mr. Stalin’s attempts to capture power through dishonest means came to nought. When the AIADMK proved its majority in the Assembly, the DMK MLAs behaved in a “nauseating” manner. “With your support and blessings, we have completed the full term. It is you who have foiled the sinister designs of our political adversaries. If these evil forces come to power, Tamil Nadu will not be the place to lead a peaceful life,” he said.

The Chief Minister said Mr. Stalin was disrespecting farmers and farming, and he would be taught a fitting lesson in the election.

Mr. Palaniswami announced that one of the 10 mega markets to be created on an outlay of ₹20 crore in the district headquarters would be opened in Tirunelveli. The work on the channel to connect the Jambunadhi and the Ramanadhi had started, and the work on digging a channel to link the Rettaikulam to the Ooththumalai tank would begin shortly.

After interacting with the workers of the AIADMK information technology wing at Alangulam, the Chief Minister met members of self-help groups at Tenkasi. While proceeding to Tenkasi, Mr. Palaniswami, along with Minister for Revenue R.B. Udhayakumar, who is in charge of the AIADMK’s election work in the district, and AIADMK Tirunelveli district secretary N. Ganesa Raja, had tea at a roadside shop at Mahizhvannanaathapuram, a hamlet.

Mr. Stalin, who refused to meet the public when he was the Minister for Local Administration and the Deputy Chief Minister, is receiving petitions at “stage-managed events”, Mr. Palaniswami said while electioneering at Valliyoor. “Mr. Stalin should tell the people about the fate of the petitions he received during the 2019 Lok Sabha election,” he said.

All in State will get COVID-19 vaccine free: Palaniswami