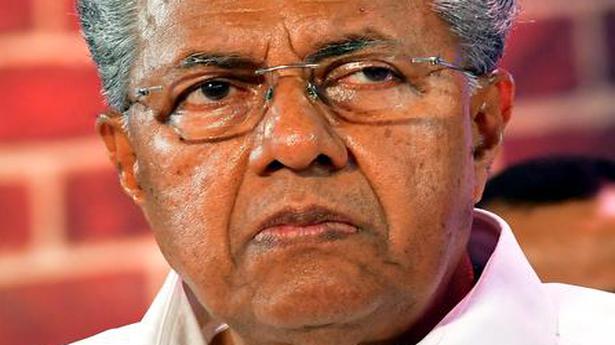 
The State Election Commission (SEC) has sought an explanation from Chief Minister Pinarayi Vijayan on the complaint that he had violated the model code of conduct with his announcement that COVID-19 vaccination will be provided free of cost to everyone in the State on the eve of the third phase of polling in the elections to local bodies in the State.

The United Democratic Front (UDF) and the Bharatiya Janata Party (BJP) had lodged separate complaints with the commission stating that Mr. Vijayan had breached the model code of conduct.

The commission has written to the Chief Minister seeking a written explanation from him, State Election Commissioner V. Bhaskaran told reporters here on Monday. Á decision will be taken on the matter after studying his explanation, he said.

On Sunday, the commission had received a number of complaints, including those from UDF convener M. M. Hassan, BJP State president K. Surendran and K. C. Joseph, MLA, seeking action against Mr. Vijayan.

Mr. Vijayan had stated that the COVID-19 vaccination would be provided free to all during a press briefing on Saturday.

Meanwhile, the commission will not be taking any action on the complaint that Local Self-Government Minister A. C. Moideen had cast his vote ahead of the scheduled polling time in Thrissur district, Mr. Bhaskaran indicated. The election officers and the returning officer concerned have reported that the polling began at 7 a.m. as scheduled and not earlier, he said.

The results of the local body elections are expected to be out by noon on Wednesday. The results in grama panchayats will be declared by 11 a.m. There are 244 counting centres in all, with 152 centres at the block panchayat level, 86 in municipalities and six in as many Corporations.

Counting will begin at 8 a.m. by observing the COVID-19 protocol. Votes polled in the electronic voting machines will be counted after postal ballots, including the special postal ballots issued to COVID-19-positive patients and quarantined electors. A journalistic podcast on the infamous ‘cyanide woman’ of Kerala