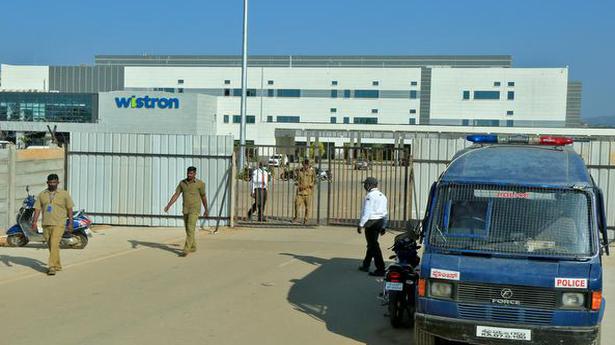 Workers are now getting messages from the employer directing them not to report to duty until further communication, the trade body said.

All India Central Council of Trade Unions (AICCTU) on Monday said their study into the Wistron employee unrest situation and incident of ransacking that followed were the results of ‘serious injustice’ and ‘exploitation’ employees suffered at work.

Some 10,000 of Wistron employees are contract workers. The fact is, their job interviews were taken by Wistron officials and even now they report to executives of the company. But their job letters say they are being appointed by certain contractors, and half a dozen contractors are involved with Wistron, a multinational corporation from Taiwan, that assembles iPhones at its factory at Narasapura Industrial Estate, in Kolar district.

“Clearly, these contractors are mere name-lenders and Wistron is following an unfair labour practice to deny workers their rights as regular/permanent workers,” alleged the trade union.

AICCTU said its office bearers visited Narasapura, met up with the workers to understand what led to workers protest and ransacking the company properties.

“The workers were understandably in fear to speak up for their rights. Each worker is compelled to do 12- hour shifts every day/night and has no say on which shift. They kept demanding for their salaries and overtime wages that were due, but officials never heard their plea.’” it said.

Workers are now getting messages from the employer directing them not to report to duty until further communication, the trade body said.

“Now they are worried about jobs and uncertain about their pending salaries and wages. The state government has to intervene and solve labour woes, especially when the majority of them are from an economically poor background and Dalits,’” demanded the trade body.