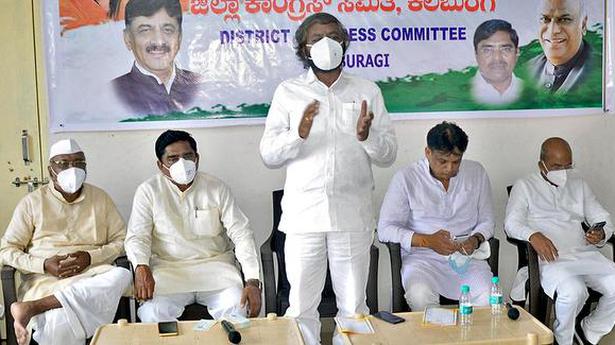 Addressing a press conference at the District Congress Committee office in Kalaburagi on Tuesday, Mr. Khandre and Mr. Singh demanded that Mr. Yediyurappa, who is slated to conduct an aerial survey of the flood-hit districts on Wednesday, should give enough time to access the damage caused by heavy rain and floods in Kalaburagi, Yadgir, Raichur, Bidar districts of Kalyana Karnataka region, and hold a review meeting with local representatives and discuss tackling the fury of floods.

Despite the government’s claims that there has been enough preparedness to handle floods, people in the grassroots level are battling even for basic necessities. “Nearly all districts of North Karnataka are reeling under floods and struggling on various fronts. Due to incessant rainfall, heavy floods and the spread of coronavirus, people are distressed and angry with the government,” he added.

Mr. Khandre urged Mr. Yediyurappa to lead a delegation from the State to the Centre to seek immediate flood relief assistance. Besides, the State government should release financial assistance to flood-affected districts on its own accord, he added.

Mr. Singh said that the condition was worse in Jewargi and Afzalpur taluks. In the last five days, there is no electricity in many villages as electricity poles have been washed away in the floodwaters.

“The State government’s decision to conduct an aerial survey will not serve any purpose,” he said and added that Mr. Yediyurappa should visit villages and speak to the flood victims to understand the actual situation.