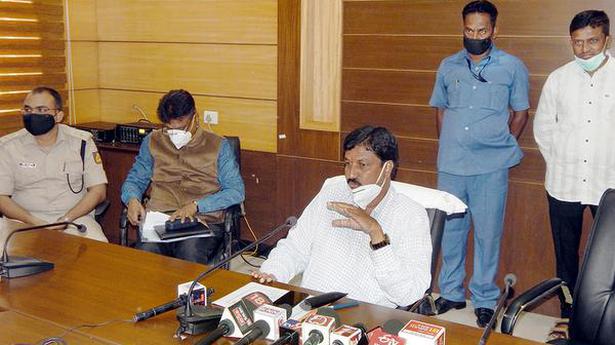 
The State government will form a committee, headed by the Regional Commissioner, to identify and remove encroachments on the rivers in the Krishna basin irrigation, Major and Medium Irrigation Minister Ramesh Jarkiholi said in Belagavi on Friday.

“It has come to our notice that rivers like the Malaprabha, the Ghataprabha, the Doodha Ganga, the Veda Ganga, the Hiranyakeshi, the Markandeya, and the Ballari Nala are all suffering from encroachments. This is one of the reasons for the flooding. During years with low rainfall, the people don’t understand the impact of encroachment. But this year they have realised it after successive floods,” he said.

“We will form a committee under the chairmanship of Regional Commissioner Amlan Aditya Biswas to conduct a survey of the entire river basin to identify encroachments and remove them. The meeting to ensure this was to be held in Bengaluru last week, but it was postponed owing to the death of former President Pranab Mukherjee. The rescheduled meeting will be held this week,” the Minister said. He was speaking to journalists after a meeting to review the COVID-19 management and other issues.

The committee will also take up operations to remove encroachments in the Krishna, he also said.

He said the Irrigation Department will study the feasibility of 11 lift irrigation projects in the Krishna basin that would help people of north Karnataka.

“The government will complete the pending work of the relocation of villages that are likely to be flooded, based on the aggregated data of earlier years,” he said.

He said the government was committed to ending the drug menace. “We will take strict action against whoever is involved in the drug business. We will ensure that raids will be conducted in schools and colleges and other places,” he said.

The government had decided to withdraw cases filed against Kannada and Marathi activists in Peeranwadi village.

“Since the cases are still at preliminary investigation levels, they can be withdrawn at the district-level. We don’t need to go to the State government for it,” he said.

He said he would ask officers to examine the legality behind the complaints raised by some Kannada organisations about the installation of the board in Peeranwadi.

He said he would look into complaints that the Suvarna Soudha was suffering due to lack of proper maintenance.

He said he would go to New Delhi to seek the Union government’s nod for the Kalasa Banduri drinking water projects. “The old proposal has lapsed. I had gone to meet Union Water Resources Minister Gajendra Singh Shekhawat with a fresh proposal. But he was in quarantine. I will go again this week,” he added. Protest staged in Kalaburagi over bifurcation of Ballari