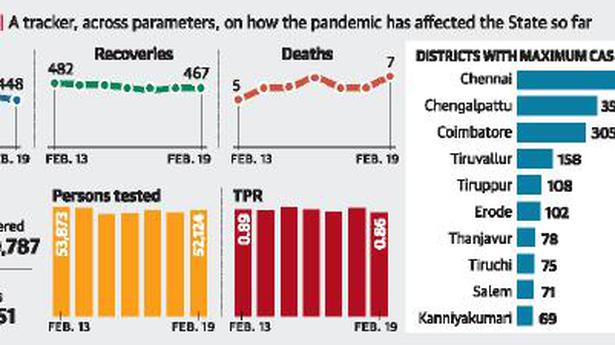 
As many as 448 persons tested positive for COVID-19 on Friday, taking the State’s tally to 8,47,385. While 467 persons were discharged after treatment, seven persons died due to the infection.

As of date, a total of 4,147 persons are under treatment in the State. Till date, 8,30,787 persons have been discharged, while 12,451 persons have succumbed to COVID-19. Of the seven fatalities, Chennai recorded three, while there was one death each in Kancheepuram, Kanniyakumari, Pudukottai and Tiruvarur. One of the deceased — a 52-year-old man from Chennai — did not have any co-morbidity. He died at the Rajiv Gandhi Government General Hospital, 30 minutes after admission on February 17, due to COVID-19 pneumonia and respiratory failure.

Of the fresh cases, Chennai reported 136, followed by Coimbatore (49) and Chengalpattu (46). There were 31 cases in Tiruvallur. Among the remaining districts, Kallakurichi and Perambalur saw no new case. As many as 22 districts recorded fewer than 10 cases each. Those testing positive included three returnees from Karnataka.

A total of 52,280 samples were tested in the State, taking the total figure to 1,70,19,551. Another private laboratory — Accuelite Diagnostics in Chennai — was approved for COVID-19 testing. There are now 256 testing facilities in the State.