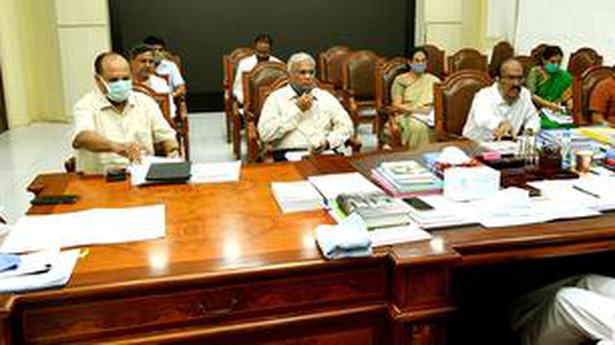 The State government has exhorted farmers to take up paddy cultivation in 50 lakh acres and other crops in another 15 lakh acres during Yasangi (Rabi) 2020-21.

Chief Minister K. Chandrasekhar Rao has directed the Agriculture Department officials to sensitise farmers about the crops that should be sown district, mandal and cluster wise. Farmers followed the regulated cropping pattern suggested by the government during the Vaanakalam (kharif) season and the same spirit should be followed in the ensuing rabi. The Chief Minister convened a meeting to prepare a plan of action for the crops that should be taken up in the ensuing season with senior officials on Thursday. The agricultural officers submitted the estimates prepared relating to kharif cultivation that were prepared on the directions given by the Chief Minister during the recent meeting.

The meeting elaborately discussed the current cropping pattern and prepared the action plan for the coming season. Accordingly, it was decided to take up paddy cultivation in 50 lakh acres, Bengal gram in 4.5 lakh acres, groundnut (4 lakh acres) and other crops including chillies, vegetables and other pulses in the remaining extent. The government had taken steps to ensure timely supply of seed and fertilizer pertaining to these crops.

He exhorted farmers to take up cultivation following the advise of the agricultural officers so that they could secure remunerative prices for their produce. The regulated cropping introduced by the government should accordingly become a continuous process and detailed reports on the cropping pattern, extent on which different crops were sown and other issues should be prepared by the officials concerned.

Officials should be prepared with action plan for the next season once sowing operations of the existing season were completed. The Rythu Bandhu Samitis constituted by the government should play an active role in this direction. Since the completion of a majority of the Rythu Vedikas was expected to be completed by Dasara, the samitis should utilise them for forging effective coordination with farmers. “People will not accept change in a single attempt and new systems will be adapted effectively with consistent attempts. Farmers need to be sensitised that the steps taken by the government are in their interests,” the Chief Minister said.

Mr. Rao advised farmers against cultivation of maize as there is uncertainty over the price as well as the market conditions for the produce. Officials should accordingly educate farmers about these aspects involved in taking up cultivation of the crop as there is no scope for providing minimum support price of more than ₹900 a quintal for the crop.