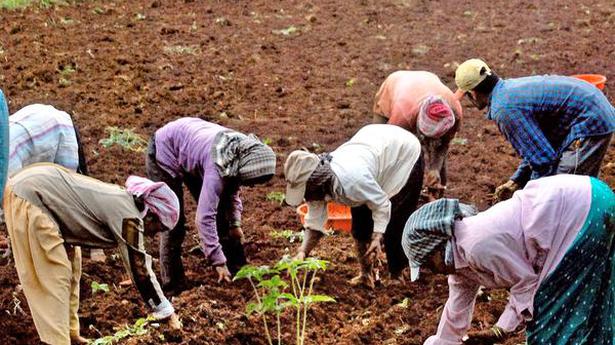 A sizeable number of labourers, who went to their village during lockdown, are finding the going tough

Shivaji Bamane worked as a labourer in Mumbai for years. He lost his job during lockdown and came back to his village Kotha near Hukkeri in August. He has not gone back and has no such plans in the near future.

However, days in his village are not idyllic. He does not find work everyday and has to keep in touch with farmers in the surrounding villages constantly, learn their crop patterns and keep moving from village to village on his bike.

While several migrant workers who had returned home during lockdown have returned to cities, there are a sizeable number like Mr. Bamane in North Karnataka districts who have decided to stay back and look for alternative avenues in their native villages.

Labour welfare activist and lawyer N.R. Latur estimates that only around 25% of the labourers have returned to cities. “This is putting pressure on villages and creating labour scarcity in cities,” he said. Mr. Bamane said he is learning new skills in his village. “Now I have to find work as a farm labourer, which is different from the construction work I used to do,” he said. What he is earning is only a fraction of his wages in Mumbai. “My expenses are limited here. I have my own house. My children will be going to a government school. My wife is working too and we are somehow managing,” Mr. Bamane said.

He has also gone to work in MNREGA sites a few times, but is not happy with the quantum of work available. Grameena Koolikarara Sangha convener Vishveshvarayya Hiremath argued that the government should expand MNREGA to give 200 days’ jobs, from the present 100.

Farooq Pathan and his brother Yadulla Pathan, who worked in Namma Metro in Bengaluru, are in their village near Hosur near Ramdurg. They commute to Bagalkot and Belagavi for construction work which does not come by easily. Yet, they are not planning to go back. “We will start some business here,” Mr. Farooq said.

The situation of Lakshmi, a labourer from Mandeval village at Jewargi taluk in Kalaburagi district, is worse. Her family of three, working as construction labourers in Bengaluru, earned between ₹20,000 and ₹25,000 a month. They returned to their native village in April but were unable to find work. They went back to Bengaluru in May, but could not find work there either. Now again back in village, she said, “Whatever little savings we had were all spent on grocery and essentials for four months. When we found it very difficult to survive in the city, we came back to our native a fortnight ago.” Presently, she has no thoughts of going to Bengaluru again.

Gundappa, a painting contractor from Warvi village in Yadrami taluk of Kalaburagi district, is among the few who is back home and happy. Having a team of around 30 members, all from Warvi, he was earning around ₹30,000 a month.

“Fortunately, I am getting enough work here in Kalaburagi. My monthly earning almost matches what I was earning in Bengaluru. So, there is no point in returning to Bengaluru,” he said.

When a large number of migrant workers were struggling to reach their hometown during the lockdown, Mahantesh from Kodal Hangarga at Aland taluk in Kalaburagi was busy establishing his food parcel service in Bengaluru.

Mahantesh, an ITI diploma holder, who lost his job during the lockdown, decided to swim against the tide. He invested his savings in the food service business. He started parcel catering to the employees who were stuck due to the lockdown in the city. After the lockdown restrictions were lifted, he is running a mess in a rented commercial shop.

“I am paying ₹30,000 rent for the premises and there are other overhead expenses as well. The business is still dull as most of the employees have returned to their hometown. I don’t know when my business will pick up,” says Mahantesh.

Not a happy harvest

A few labourers, who had gone back to the city seeking work, are also now back in the village since it is the harvest and festival season.

Two important crops, green gram and black gram, are harvested across Kalyana Karnataka region and some Bombay Karnataka districts. However, most of the crops in KK region have been damaged due to floods and there is very little harvesting work in the fields. This has made work hard to come by. “It is normal for labourers to come home for harvest season and the holidays between Navaratri and Deepavali. Every year, it is the period of celebration as men who work in cities come back bringing gifts for their children and relatives. But this year has been very bad. There is despair all around,” said Jayashree Gurannanavar, farmers leader.

Joint Director of Agriculture Shivanagouda Patil said there is a problem of excess farm labour in villages.

After accident, villagers stage protest in front of bar