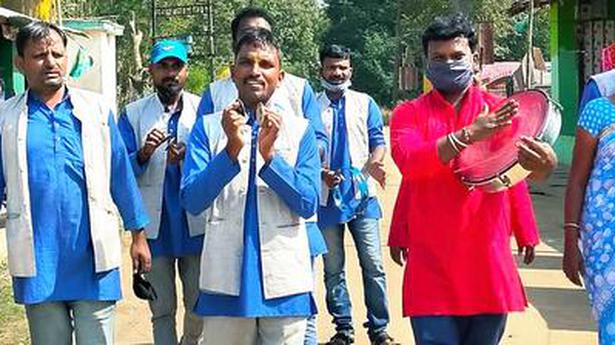 
With polling for gram panchayats scheduled to take place on December 22 and 25, the Dharwad district administration has employed artistes to sensitise voters through street plays and folk songs on the significance of exercising one’s franchise during the elections and also on COVID-19 guidelines.

Such awareness programmes aimed at increasing the polling percentage were held at Kandli and Dimbuvalli villages of Kalghatgi taluk of Dharwad district on Tuesday. The Department of Information and Publicity is conducting these programmes for voter awareness on polling and COVID-19.

Through the street plays and folk songs, the artistes conveyed that as every citizen had a right to vote, he should make his choice without coming under the influence of money power or any other gifts.

The artistes also told the people to wear masks, maintain physical distance while casting their votes during the elections. Several people who witnessed the street plays appreciated the initiative by the department. Changes to land reforms opposed at ‘people’s session’ in Karnataka