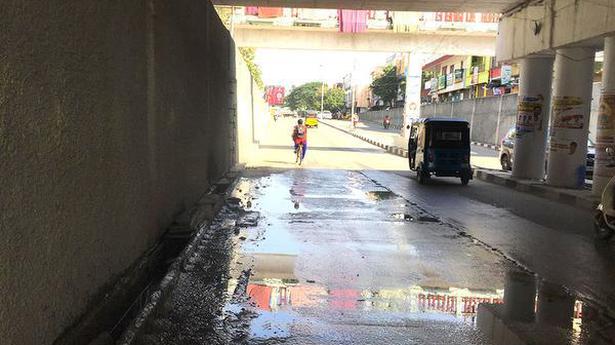 
Water flows onto the road at Aranganathan subway in West Mambalam, where the traffic flow is towards T. Nagar. Due to this situation, motorists are at risk for accidents. Greater Chennai Corporation (GCC) officials say the clogged rainwater storage pits along the subway are causing the water flow. Severely damaged in the 2015 floods, the subway was renovated in September 2016 along with a few other subways, including Veeran Sivalingam subway, Madley subway, RBI subway and Gengu Reddy subway.

As part of the renovation, the carriageway was relaid; rainwater storage pits were desilted and new LED street lights installed. The renovation was carried out at a cost of ₹15 lakh by GCC.

“At night, we cannot see the water on the subway. Excess water from the drain keeps overflowing onto the road continually,” says S. Kumar, a resident of Saidapet.

Every day, motorists from K.K. Nagar, Ashok Nagar, Ekkatuthangal, Nesapakkam, West Mambalam, T. Nagar, and Vadapalani use Govindan Road and via Aranganathan subway and CIT Colony (Saidapet), each Anna Salai. This route enables motorists to skip congested traffic points including Duraisamy subway, T. Nagar bus terminus junction and Arcot Road to reach Anna Salai. However, motorists underline how unsafe it is to access the approach road — Reddy Kuppam Road which links the subway with West Mambalam. With a Tasmac liquor outlet on Reddy Kuppam Road, the stretch near the subway is crowded most of the time blocking easy traffic movement including that of MTC buses.Further, the intersection of Reddy Kuppam Road and the ramp of the subway is dug up frequently for cable repair work whicha has resulted in an uneven road.

In this regard, a GCC official says, “Steps will be taken to unclog the drain.” Counting of votes at seven centres in Udupi today