The 35th match of the 13th season of IPL is being played between Sunrisers Hyderabad (SRH) and Kolkata Knight Riders (KKR) in Abu Dhabi. Hyderabad won the toss and chose bowling. The role of bowlers will be important on the slow wicket here. There was a relief news for KKR before the match. The spinner gave Sunil Narine a clean chit from the suspected bowling action committee of the IPL, but was not included in the playing eleven due to lack of fit.

Warner has a chance to make a record
Hyderabad captain David Warner will have a chance to complete 5000 runs in IPL. They are just 10 runs away from this figure. So far in the history of the league, only Virat Kohli (5759), Suresh Raina (5368) and Rohit Sharma (5149) have touched the figure of 5 thousand.

Bowling team won the toss twice in the season
So far in this season of IPL, this has happened only 2 times when the captain of the team has won the match while winning the toss and bowling. In the opening match of the season, Chennai Super Kings captain MS Dhoni won the match while bowling by winning the toss against Mumbai Indians in Abu Dhabi and Rajasthan Royals captain Steve Smith in 9th match against Kings XI Punjab in Sharjah.

2-2 change in both teams
Two changes were made to the KKR team. Loki Ferguson and Kuldeep Yadav were replaced in the playing XI, replacing the famous Krishna and Chris Green. At the same time, Hyderabad team included Basil Thampi and Abdul Samad in place of Shahbaz Nadeem and Khalil Ahmed.

Warner-Bairstow Hyderabad’s top scorer
Hyderabad captain David Warner has scored the highest number of 284 runs for his team in the season. Johnny Bairstow has scored 280 runs since Warner. Apart from these, Manish Pandey is third with 206 runs.

Pat Cummins’ form concerns
Fast bowler Pat Cummins’ bowling form remains a cause of concern for KKR. Cummins (15.5 crore), the league’s most expensive foreign player, has played some good innings in batting, but in bowling he has got only 2 wickets so far. In 6 out of 8 innings in the season, he did not get a single wicket.

Hyderabad lost in the last match
Hyderabad suffered a 7-wicket loss to Kolkata in the 8th match of the season. Hyderabad, batting first, scored 142 runs for 4 wickets. In response, KKR had won the match 2 overs earlier. 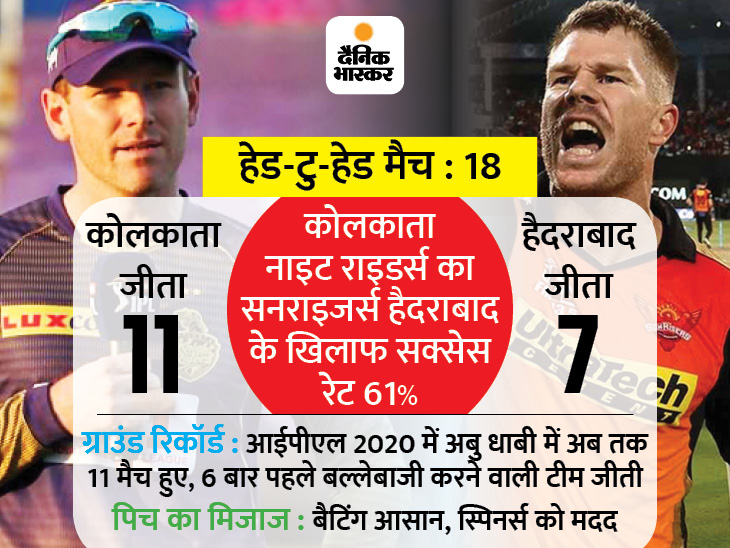 Federer, a 20-time Grand Slam champion, went on to sing the rock band Beatles for the commercial, the second year of his career when he would not win a Grand Slam title

Australia series can be held in Canberra and Sydney, Quarantine can remain in Sydney only

Morgan said- Cricket has effect on mental health in bio-bubble, players get freedom to withdraw name