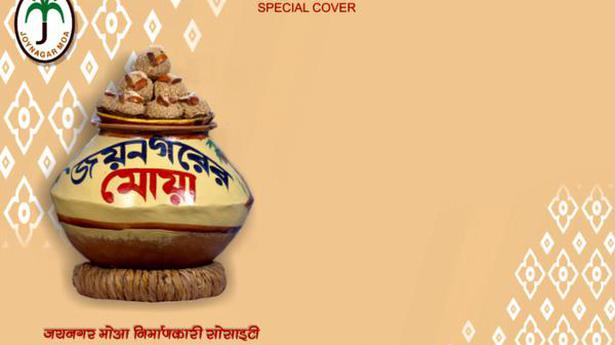 It will boost the business for highly perishable but delicious dish, say manufacturers

The moa of Joynagar — a region- and season-specific sweetmeat that is highly popular in West Bengal but not as universally celebrated as the rossogolla — finally appears to be finding its place under the sun.

On Wednesday, the postal department will release a special envelope to celebrate this popped-rice ball that’s glued together with fresh date-palm jaggery and is exclusively manufactured in the town of Joynagar, near Kolkata, during the winter months.

“There can’t be a matter of greater pride for us. The moa will become more famous now,” Ashok Kumar Kayal, founding secretary of the manufacturers’ association — Joynagar Moa Nirmankari Society — told The Hindu.

The special cover — 1,000 of which have been printed — will be released jointly in Kolkata by the APEDA (Agricultural and Processed Food Products Export Development Authority) and the postal department in the presence of the representative of the manufacturers’ association. The APEDA played a crucial role in the export of moa — for the first time ever — that took place in January this year.

Unlike the rossogolla, the moa is highly perishable — it can retain its taste and texture for only 5-7 days under normal refrigeration — and therefore its commercial export was never seriously considered. But on January 19, with active help from the APEDA, a Kolkata-based exporter sent 45 kg of moa to Bahrain by air. Repeat orders — and orders from some other countries as well — poured in, and before the winter was over, some 450 kg was exported in all.

“The joint efforts of the APEDA, exporter and the Nirmankari Society have made it possible to create tremendous publicity and generated orders by the importing countries. This release [of the special cover] just before the festive season shall boost the business of Joynagar Moa in both the local and international markets. In the upcoming season, we anticipate more than 2000 kg of export,” the APEDA said in a statement.

The special envelope will mention this historic export apart from describing the moa, which dates back to 1904 and earned the Geographical Indication tag of Joynagar Moa in 2015. As many as 46 manufacturers are registered with the Joynagar Moa Nirmankari Society and 25 of them have so far received the certificate to make Joynagar moa.

“The remaining 21 should get their certificates before Durga Puja. We are also in talks with Jadavpur University, IIT-Kharagpur and also with CSIR-CFTRI in Mysore for devising a special packaging to enhance the shelf life of moa. As of now it is available for only three months, usually starting December 1 — that’s the period when date-palm jaggery is available. If we develop a packaging that keeps the moa fresh even for three months, then the window of its availability expands to six months in a year, a prospect that should please everybody,” Mr. Kayal said.