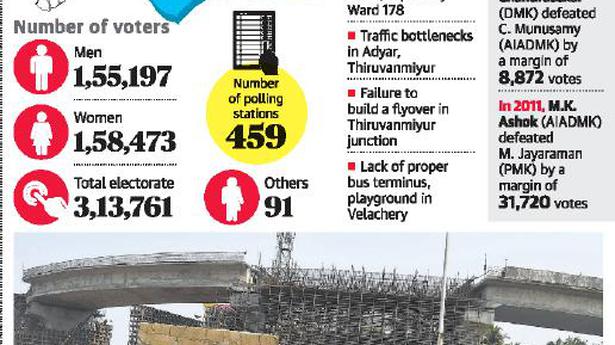 Daily commute dominates the agenda in the constituency, which is spread over Adyar, Thiruvanmiyur and Besant Nagar

Velachery Main Road was riddled with potholes and road cuts making it extremely difficult for motorists to navigate. No one travelling through the road would have voted for the ruling party. But that was till last week. Now, the entire stretch is being relaid, and it looks all new and smooth.

The ruling AIADMK has fielded M.K. Ashok again. He was the first MLA of the constituency that was carved out of Tambaram in 2011. He was there when Jayalalithaa laid the foundation for the flyover in 2016, which is crawling its way to completion now. That year though, he was not given nomination, and DMK candidate Vagai Chandrasekar emerged victorious.

This year, the DMK has given the seat to its ally Congress that has fielded Tamil Nadu Youth Congress Committee president JMH. Hassan Moulana.

For Makkal Needhi Maiyam (MNM), Santosh Babu, who quit the Indian Administrative Service, is the candidate. Unfortunately, this former IT Secretary of Tamil Nadu has been forced to campaign through the digital mode after contracting COVID-19.

With one of the MNM’s star candidates in the fray, the results here could hint at whether or not the middle class looked at the party as an alternative to the Dravidian fronts, at least in the urban milieu.

With Adyar, Thiruvanmiyur and Besant Nagar, apart from Velachery, the constituency has a sizeable population of upper middle-class voters. For the AMMK, M. Chandrabose is trying his luck, and Naam Tamilar Katchi has fielded M. Keerthana.

In fact, DMK president M.K. Stalin was one of the earliest residents of Velachery. He moved here when he was Chennai Mayor in the late 1990s, and many then wondered why he had chosen a suburb to live. In the two decades since then, Velachery has seen tremendous growth, but infrastructure bottlenecks persist.

“For two decades, the politicians have promised to beautify the Velachery lake and make it a tourist destination. Nothing has happened even after four elections. Only the promise remains and encroachments continue to eat up the lake,” says S. Kumararaja, vice-president, Federation of Velachery Welfare Associations.

While the 2015 floods could be one reason for the election of the DMK MLA from here in 2016, the storm-water drain network has reduced flooding to a great extent. Despite intermittent heavy rain last year, flooding occurred only in parts of Ward 178, and the government has taken up a ₹15-crore work to desilt and strengthen the canal that connects the Velachery lake with the Pallikaranai marshland, say officials. At present, the bus stand looks ugly and dust-stormed owing to the flyover work, and there has been a demand to shift it to a place near the Velachery MRTS station to ensure urban mobility. The failure of Southern Railway to link MRTS to Adambakkam and an incomplete six-vent culvert near the Velachery MRTS station, connecting the OMR to the airport, are the two other traffic bottlenecks that await action.

“The MLA should have more interactions with residents’ welfare associations,” says a retired IAS officer. A resident of Adyar, he says, “There are still households that depend on street taps for water. Some more parks should be created. Parking has become a major problem. Multi-level parking lots can be constructed at Taramani, Adyar and Thiruvanmiyur,” he says, emphasising that traffic bottlenecks should be identified and appropriate plans be prepared.

A flyover at the Thiruvanmiyur junction has been a long-pending demand of not only people from here but those travelling along the ECR. “They took measurements but nothing has happened in the last decade,” says a member of Green Valmiki Nagar Movement.

Better traffic management and garbage clearance at Adyar and Thiruvanmiyur are the two other demands of the residents. SAOWA TNHB Flats Association at Thiruvanmiyur has sought a police booth in the vicinity. Beaches though were maintained, the residents say.

Despite being a city constituency, the undercurrent of caste runs here. Vanniyars, Thevars, Brahmins, and Dalits live in large numbers in the constituency.

AIADMK sources say the Thamizhnadu Brahmin Association has asked the community to vote for the AIADMK-BJP alliance and not for the MNM that could spoil the NDA’s chances.

The AIADMK candidate held a meeting with the Brahmins here and promised to redress their grievances, says an insider. In the Taramani ward, there are quite a number of Yadavas as well, locals say. 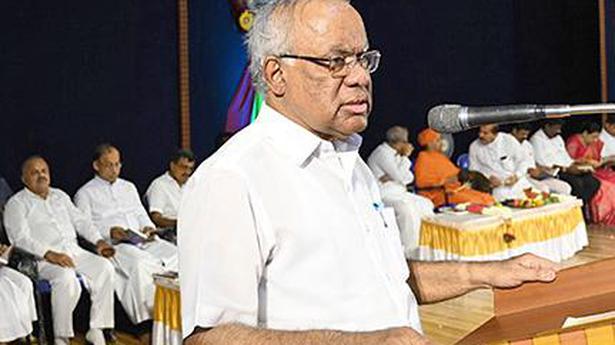