Street food vendors are an essential part of the urban landscape. Acknowledging it, GoI in June 2020 designed a customised microcredit scheme to help them with working capital. Clearly, some civic officials in Gujarat have read GoI’s strong emphasis on street vending wrong. Four of the state’s urban civic bodies, including that in Ahmedabad, have targeted vendors selling non-vegetarian food on utterly unreasonable and absurd grounds. These include comments by officials on “smell” and “hygiene”. It is deeply concerning that we are adding olfactory intolerance to the increasingly long list of intolerances in India. And as for hygiene, officials surely should have their plates full – why not clean up hospitals, for example.

The sequence of events, as made clear by TOI reports, is also troubling. Ahmedabad civic body’s town planning committee announced a drive against non-vegetarian street food vendors. The committee’s chairman said food carts targeted will be ones on arterial roads and those near schools or religious places. Ahmedabad’s civic agency officials attributed the drive to complaints from some residents. But Gujarat CM Bhupendra Patel clarified that state policy did not intrude on food choices as long as relevant guidelines are followed. Notwithstanding that, on Tuesday, about 40,000-50,000 vendors of the city’s 1.1 lakh were estimated by their association to have stayed away. Civic officials are now claiming encroachment as a reason.

This salad bowl of unconvincing justifications suggests civic authorities have manufactured reasons to push some vendors into less-visible parts of the city. The move also raises questions about the CM’s assurance. Note that Gujarat state BJP chief also made similar comments. In some urban centres of states like Haryana, local actions have enforced a ban on meat shops during festivals despite there being no state-level directions on the issue. These are dangerous trends, with real potential consequences for harmonious coexistence.

There is also, most immediately, the issue of inequity. Food vendors are a subset of the self-employed workforce, a vulnerable group that was badly hit by Covid’s economic fallout. Gujarat has a relatively high share of such employment. GoI’s June 2020 employment data showed that 37.8% of urban households in the state are self-employed, as compared to the national average of 30.7%. Taking some food vendors from their corners and pushing them into smaller roads has a direct impact on their livelihoods. Before this unjustifiable action gets even worse, Gujarat’s senior-most BJP leaders must help in restoring status quo ante. 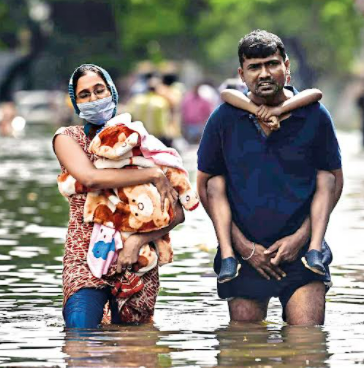 The weather is bad,so is the government. But how good are we?