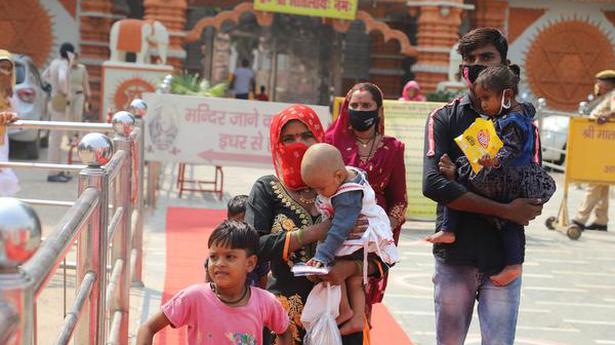 Despite the threat of COVID-19 still looming large, a usual pre-pandemic buzz marked the opening of the annual week-long Navratra Mela at Mata Sheetla Devi shrine here on Saturday.

Devotees, including children of all ages, from Haryana, Punjab, Delhi, Rajasthan, and other States started to throng the temple early in the morning.

The visitors could be seen jostling in queues outside the premises with little regard for social distancing norms. The shrine board, however, distributed free masks to the devotees and sanitised their hands.

Around six lakh devotees are expected to visit the shrine over the next week. The “mela” is expected to draw maximum crowd on Saptami (October 23) and Ashtami (October 24). The shrine was already open to the devotees with the Standard Operating Procedures, but the administration issued fresh directions on Friday regarding safety measures.

Around noon, an auto-driver from Delhi, Ranbir, accompanied by his family, including an infant, said he had come to visit the shrine since his wish for a male child was granted by “Maa”.

The 37-year-old said the infant could not be left at home as his hair needed to be donated to the temple.

“How long can we stay indoors?,” asked Ranbir, while taking out a bottle of sanitiser. While he claimed that the family took all precautions, none of the women or children were wearing masks.

Rohit, a mobile shop owner, travelled for around six hours from Punjab’s Bhatinda to reach the temple with his wife and newborn.

“We have come to express our gratitude to the deity for blessing us with a male child,” he said.

Temple officer Yogdutt Sharma told The Hindu that the deity was associated with the welfare of the children and, therefore, most of the devotees are visiting the shrine with their children.

He said the temple staff could not prevent anyone from entering the premises.

He emphasised that the shrine board had taken a host of measures to ensure the safety of the visitors and the temple staff.

“The 106 staff members, including the policemen inside the temple, were tested for COVID-19 and four of them tested positive. Unlike the previous years, the visitors are told to leave the prasad at a designated place soon after they enter the premises,” said Mr. Dutt.

Gurugram Civil Surgeon Virender Yadav said the temple staff would be tested again during the mela.

Former Gurugram Bar Council president Kulbhushan Bhardwaj, visiting the temple, said the devotees were left disappointed as they were not being allowed to offer prasad inside the main temple.

“People travel long distances to reach the temple and are left disappointed when told not to carry prasad, chunnis and other offerings inside the main temple. The priests should be made to wear gloves and accept their offerings. It is a matter of faith,” said Mr. Bhardwaj, a former BJP district president.

“Parents should avoid taking children to melas and crowded places since they cannot wear masks, maintain social distancing and sanitise their hands all the time — the three basic tenets of protecting oneself and others from COVID-19. These children going back home will pass on the infection to their family members and others. Some of these children will develop multi-systemic inflammatory syndrome of childhood, which is a life-threatening form of COVID-19,” said Dr. Chugh.

A senior health department official also questioned the rationale behind allowing the mela, expressing apprehensions that such gatherings could lead to a spike in COVID-19 cases.