A 65-year-old woman, who was presumed to be eking out a living by begging in front of Sri Guru Narasimha Temple at Saligrama town in Udupi district, surprised everyone on Thursday when she donated ₹1 lakh towards ‘Anna Daana’ at the temple for February 9, prior to setting out on a Sabarimala pilgrimage.

Ashwathamma, a native of Kanchugod village, off the fishing town of Gangolli in Kundapura taluk, was seen almost every day near the Guru Narasimha and Anjaneya temples in Saligrama. Fondly called “Ajji” by devotees, Ms. Ashwathamma spends her nights in an enclosure meant to keep the temple’s boat next to the kalyani. Having lost her husband and daughter, she occasionally visits her grandchildren at Kanchugod, according to the temple authorities.

Newly elected temple managing committee member K. Ananta Padmanabha Aithal, who was committee president in the previous term, told The Hindu that Ms. Ashwathamma wanted to host Anna Daana on February 9 when she was to wear the “irumudi”. However, the management told her that the contribution would be kept as a deposit and the proceeds would be used for a one-day Anna Daana at the temple every year.

The elderly woman also claims to have contributed around ₹7.5 lakh to Polali Rajarajeshwari Temple, near Mangaluru, and the Sabarimala Ayyappa temple, among others, Mr. Aithal said. Following this, the temple management has arranged for her a night’s stay inside the temple complex where two security guards too would be present to ensure her safety, he added.

On Thursday, Ms. Ashwathamma handed over the amount to temple manager Nagaraja Hande and chief priest Janardhana Adiga in front of the presiding deity. 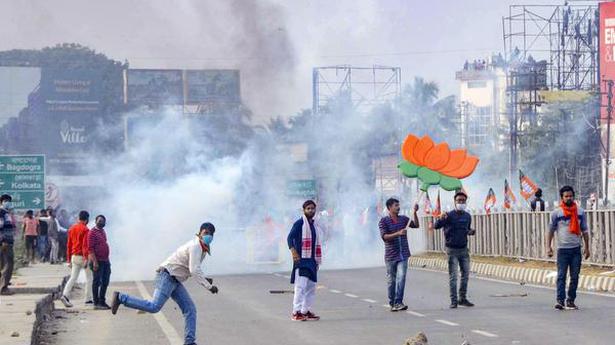 ‘Death of BJP supporter at Siliguri due to shotgun injuries, we do not use shotgun’, says West Bengal police Inspection of Chennai Metro north line to begin next week