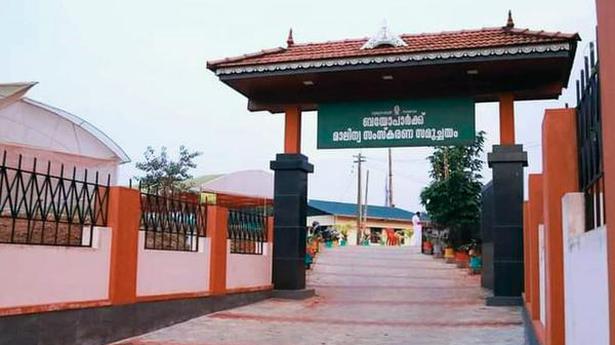 
Segregation at source and decentralised treatment will go a long way in getting rid of garbage menace. This is the message of the Guruvayur-model waste management, hailed by Finance Minister T.M. Thomas Isaac.

Until recently, the temple town used to be in the eye of a storm for indiscriminate dumping of waste, unhygienic surroundings, and nauseating stench from waste dumps. It is estimated that Guruvayur is visited by more than 3.5 crore pilgrims a year.

The number of visitors is around 500 times that of the local people. The municipality generates six tonnes of waste a day and it becomes almost double that amount during pilgrimage seasons.

In the absence of a scientific waste management plan, hundreds of lodges and wedding halls used to dump garbage at Choolpuram, the dumping yard of the municipality.

Heaps of rotten garbage made life horrible for the residents and shop owners in three wards around the yard. Making the situation worse, lodges and restaurants discharged their raw sewage containing human excreta and other waste directly to the Valiathode, a drain running through the town.

The High Court intervened many times, directing the municipality to find a permanent solution to the issue. Now, Choolpuram is a symbol of sustainable development.

“The remarkable change happened when the municipality started a bio-fertilizer unit with the support of the Integrated Rural Technology Centre (IRTC) of the Kerala Sastra Sahitya Parishad in September 2017,” said M. Krishnadas, Guruvayur municipal chairman.

A 11,000-sq ft building was built at ₹1.08 crore and it can treat three to five tonnes of waste a day, including food waste and plantain leaves from the wedding halls and restaurants at Guruvayur.

“Strict segregation of organic and inorganic waste is the key to successful waste management. Kudumbashree workers collect waste from eateries. If inorganic waste is found mixed with organic waste, it will be sent back. The IRTC has developed a special shredder for the plantain leaves as it constitutes a major chunk of waste. The bio-fertilizers will be ready within 30 days.” The unit could be a good source of income for the municipality.

Disposable glasses were banned and eateries were urged to use steel plates instead of plantain leaves as far as possible. Steel plates and glasses were supplied on rent at wedding halls. Most of them cooperated with the mission. Aerobic bins were set up to collect waste from public places.

A Green Action Force was set up for collecting inorganic waste. The municipality has a modern plastic-shredding and baling unit, the chairman said.

The local body has developed an agro-nursery of 1,000 sq ft at Choolpuram, once a stinking dumping yard. The new bio-park attracts a lot of visitors.

Vallasadya to be held at Aranmula today