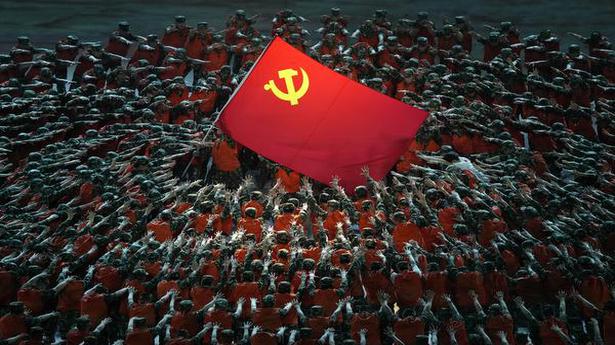 In the multitude of commentaries that have appeared on the centenary of the Communist Party of China (CPC), analysing its strength, skills and longevity, a crucial missing component is that of the status and role of the working class, whom the party claims to historically represent. In its 100-year journey from a revolutionary party to a governing party, the CPC has unfailingly asserted its identity as the ‘vanguard of the Chinese working class’. The centenary offers an opportunity to look at the reality of such assertions, the actual conditions of the working class and its political status in contemporary China.

An identification with labour

While China’s labour history predates the formation of the CPC, going back to the late 19th century, the party’s formation in 1921 provided the ideological impetus and organisational basis for the labour movement. The efforts of the CPC, preceding the establishment of the People’s Republic in 1949, was to embed itself in the labour movement, in line with its ideological-political moorings of being the vanguard of the working class in the protracted struggle. Post 1949, under proletarian work ethic and socialist construction emphasised by Mao Zedong, there was prioritisation of the modern industrial sector, especially heavy industry. Raising of wage levels, ensuring labour protection and providing permanent employment were accorded importance by the Party-state.

Party organisations were created in enterprises, as cadres forged concrete links with the industrial workers. Through a series of mass political campaigns, the Party-state consolidated its control over industrial enterprises. In the process, there was a change in the position and relationship of the workers, as they participated in factory management and politics. Further, through the broad range of workplace-based welfare provisions and services, a cradle-to-grave welfare system for the workers and their dependents was created. This political empowerment of the workers as stakeholders, albeit under the control and patronage of the CPC, created an ‘industrial citizenship’ (to quote sociologist Joel Andreas).

The turbulence and chaos inflicted by the Cultural Revolution that shook China’s political and social order played a big part in charting the course of realignment and reprioritisation in the post-Mao period, by Deng Xiaoping after 1978. Marketisation — although directed by the state — was adopted as the economic strategy, though directed by the state, and conscious efforts were undertaken to integrate China with the world economy. As the pace of economic reforms increased, they vastly recast workplace relations and labour politics by gradually disenfranchising the workers. As profit maximisation, efficiency and economic competition became the buzzwords in pro-reform advocacy, the permanent employment system was replaced with a labour contract system. Similarly, reducing the power and influence of workers, factory directors/enterprise managers were given vast powers and responsibilities. Increasingly, preference was also given to technocrats, and management and business graduates in appointments to middle and higher-level leadership positions in enterprises, rather than workers who had come up through the ranks. Hundreds of workers considered redundant were laid off in lieu of monetary compensation through compulsory retirement programmes.

Parallel to this restructuring of public enterprises, there was active promotion of private enterprises, involving both domestic and foreign capital. With the availability of uninterrupted supply of rural migrant labour and taking advantage of low labour costs, transnational corporations shifted their manufacturing operations offshore to China. Bolstered by the preferential treatment provided by local governments, the burgeoning export-oriented manufacturing with active supply chains, established its own model of employment relations, which was built on the expropriation of labour. Despotic management, exploitative work conditions, coercive discipline and surveillance are some of the characteristic features of the work ecosystem. Violations of labour standards and rights are endemic.

Resistance as a challenge

With no tangible worker-centric avenues for collective voice, workers have resorted to the use of radical autonomous actions to vent out their grievances. Over the years, workers’ protests have remained steady in China. The expansion of workers’ resistance has remained a political challenge for the Party-state. As maintenance of stability and industrial peace is considered essential for unhindered economic production, the CPC has crafted responsive measures that can be seen as crisis mitigation.

A series of pro-labour pieces of legislation has been enacted, encouraging workers to use them to address conflicts and grievances. In putting in place this ‘rule by law’ (also necessitated by the need for a legal framework upon China’s entry into the World Trade Organization in 2001), the Party-state is able to individualise labour conflicts, thus continuing to thwart possibilities and avenues for autonomous, coordinated, and durable collective mobilisations. Equally, it dualistically uses its responsive and repressive capacities — welfare concessions on the one hand and ramping up public security apparatus as well as active use of force on the other — to meet labour unrest. The top-down concessions of the central Party-state also strategically shielded it from workers’ disaffection, which in turn was directed towards employers and the local governments.

Reforms versus social base

The intensification of the pace of economic reforms has impacted the CPC’s membership and cadre recruitment strategies. The traditional social base of the party — peasantry and industrial proletariat — has been gradually shrinking. There has been a steady absorption of new classes of entrepreneurs, urban professionals and university graduates. Despite increasingly becoming the critical engines in China’s economic rise, the rural migrant workers remain largely excluded from the partyfold. The steady erosion of ‘industrial citizenship’, the growing precariousness of employment and increasing peripheralisation of workers is not an isolated phenomenon with regard to China, as it coincided with the global neoliberal turn since the 1980s, that drastically changed employment relations across the world. The diminished status of workers is a grim reality and despite President Xi Jinping’s increasing reiteration of ideology, it is rooted in status quoism, shorn of any emancipatory promise or politics for the working class.