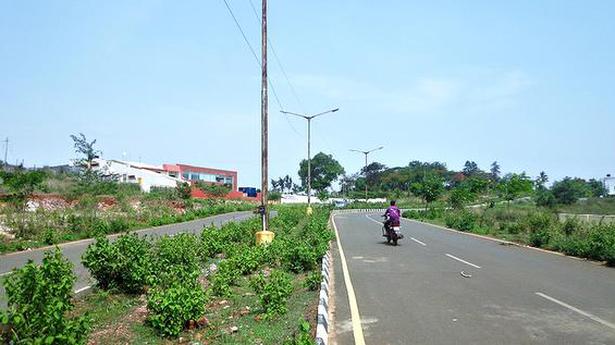 
While much is spoken about promoting tier-2 and tier-3 cities for investments by industrialists and entrepreneurs, the treatment meted out to smaller entrepreneurs who have been made to wait for more than a decade reveals the ground reality.

It was way back in 2007 that Aryabhata Tech Park was set up between Hubballi and Dharwad with the objective of making the twin cities the “next IT destination.” Spread over 25.5 acres of land, the tech park raised hopes of budding entrepreneurs from the region.

The tech park did take off, with the first round allotment of 15.5 acres to 11 investors, including some genuine investors, who in the last decade have started functioning from the tech park and even expanded their operations to foreign countries.

The Hubballi Dharwad Municipal Corporation initiated the process for second round allotment of the remaining 10.2 acres of land and shortlisted six entrepreneurs. In 2008, the municipal corporation sent the proposal to the State government and that was the end of it. In 2017, the municipal corporation again sent a revised proposal for four entrepreneurs as by that time, two other companies had opted out because of the inordinate delay.

Deepali Gotadke, award-winning woman entrepreneur from Hubballi and proprietor of ClickHubli.com and Web Dreams, is one among the chosen six, who is still waiting for the land even after 12 years. Gumbi Software and two other firms are also waiting since then.

The reason, is, while the consultative committee set up by the municipal corporation recommended her name for allotment of land at the tech park, no decision was taken at the government level. For over a decade, Ms. Gotadke has paid several visits to the government offices in Hubballi and Bengaluru, but has not lost hope yet. She was the first person to start e-commerce in North Karnataka and is presently working on a United Nation’s project of e-commerce pertaining to four nations, including Nepal.

The recent meeting that Large and Medium Industries Minister and district in charge for Dharwad Jagadish Shettar chaired at Bengaluru has rekindled her hopes. At the meeting, the Minister directed the authorities to decide on the issue at the earliest. “I have spent so much time waiting for this land. I even didn’t apply for land in the proposed ‘Mahila Park’ near Dharwad as it would mean starting from zero again,” she said.

Municipal Commissioner Suresh Itnal told The Hindu that the issue now was of fixing the land price. “In the first allotment, the land was given at the rate of ₹10 lakh per acre. Now it has to be revised. The district committee headed by the Deputy Commissioner is expected to convened a meeting next week to finalise the land price,” he said.

He clarified that out of the 10.2 acres land remaining at Aryabhata Tech Park, the screening committee had recommended allotment of 3.5 acres for four.