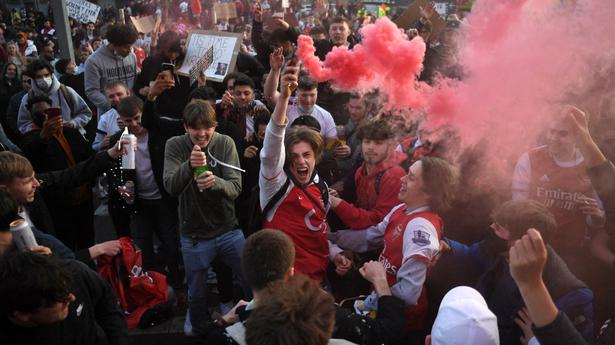 What was the idea behind the Super League? What lies ahead for European club football?

The story so far: Last Sunday, 12 of Europe’s biggest clubs resolved to form The Super League, a multi-billion-dollar tournament to be largely played among a closed group of 20 teams. The move was championed by Manchester United, Manchester City, Liverpool, Arsenal, Chelsea and Tottenham Hotspur from England, Real Madrid, Barcelona and Atlético Madrid from Spain, and Juventus, Internazionale and AC Milan from Italy. But in under 48 hours, the project, which would have severely disrupted the Champions League, the crown jewel among all competitions run by European football’s governing body UEFA, became unviable after all six English teams backed out, followed by Internazionale and Atlético Madrid. Real Madrid president Florentino Pérez, the chairman of the Super League, is still holding out hope and believes the initiative is just “on standby”. But UEFA president Aleksander Čeferin told the Associated Press on Friday that the Spanish and Italian teams still clinging on to the Super League risk being banned from the Champions League.

What was the idea behind the Super League?

According to its founding members, there was a persistent desire to “improve the quality and intensity of existing European competitions throughout each season, and of creating a format for top clubs and players to compete on a regular basis”. The Super League would ensure more matches between high-quality teams, which would generate more revenue and “put the game on a sustainable footing”. The clubs believed that there was “instability” in the existing football economic model, which was accelerated by the COVID-19 pandemic. Pérez declared that the Super League would take football to its “rightful place in the world”.

Why did it crumble?

Even as football authorities and national governments threatened penalties of varying degrees, and murmurs were heard from players and coaches, the project became untenable largely because of vociferous protests by fans, both on the ground and on social media. With football increasingly becoming commercial and corporate ownership being widely prevalent, some supporters felt that this was yet another attempt by owners to use clubs for private profit.

The closed nature of the competition, but for five places offered on a rotational basis, did not please the likes of Pep Guardiola, the celebrated Manchester City coach. That the 12 founding clubs and three future permanent members would be under no risk of missing out meant there was no meritocracy. In contrast, qualification for the Champions League depends on where a club finishes in its domestic league. “It is not sports if the relationship between effort and reward doesn’t exist … if success is guaranteed and it doesn’t matter if you lose,” said Guardiola.

England’s Premier League, Spain’s La Liga and Italy’s Serie A moved to expel the teams, sensing that their championships would become largely uncompetitive. UEFA, eager to protect the Champions League, said it would ban Super League players from playing for their respective nations in flagship events like the Euros. FIFA president Gianni Infantino bluntly stated that the 12 clubs will have to “live with the consequences”. British Prime Minister Boris Johnson went to the extent of terming the Super League a “cartel” and warned that he would drop a “legislative bomb” to scupper the project.

What lies ahead for European club football?

The Super League announcement came a day before UEFA was to announce the ratification of a revamped Champions League, starting from 2024. With the Super League all but shelved, the reformatted Champions League will take centre stage. The competition will be expanded to 36 teams from its current 32, and will dispense with the group-stage format of eight groups with four teams each in favour of one consolidated 36-team table, from where 16 teams will qualify for the knock-outs. Each team will play a minimum of 10 matches, up from six in the current format.

One objective is to generate more revenue from ticket sales, broadcast rights and sponsorships. The second is to give more teams a chance to make the knock-outs and ensure that the competition is alive till the very end. But there are fears that the increase in revenue will just make the already rich clubs richer and further skew the respective domestic leagues in their favour. Juventus, for example, has won the Serie A nine times in a row, while Bayern Munich in Germany and Paris Saint-Germain in France have been equally dominant. Liverpool coach Jürgen Klopp recently frowned at the increase in matches, fearing player burnout, while Manchester City midfielder İlkay Gündoğan called the new format “the lesser of two evils” in comparison to the Super League.