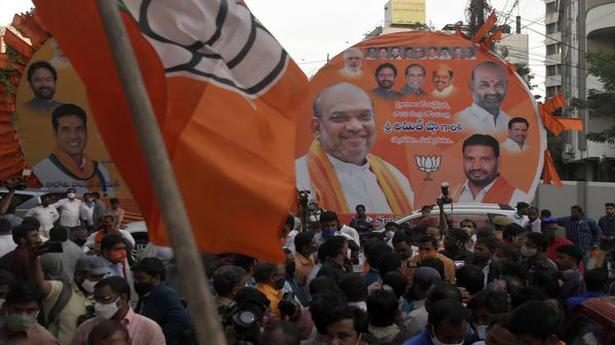 After the formation of the State of Telangana in 2014, as India’s 29th State, many political leaders and prominent social activists believed that the entry of the Bharatiya Janata Party (BJP) was not possible for probably the next two decades or so. In support of this, they often cited the glorious history of Telangana, marked by the Telangana armed struggle of 1946, to the collective and democratic spirit demonstrated during the heyday of the struggle for a separate State of Telangana. Demand for a separate State was around the issues of agrarian distress, imposed social and economic backwardness and about taking pride in popular culture, literature and language without turning chauvinistic against those continuing to reside from Andhra.

Change in less than a decade

Telangana, even as part of the erstwhile undivided State, had witnessed a prolonged period of communal harmony and took pride in its ‘Ganga-Jamuni Tehzeeb’. Further, Telangana had robust Dalit-Bahujan politics that in the past worked in close proximity to the Left politics, including both parliamentary and extra-parliamentary mobilisations, and, more recently, in kick starting the demand for autonomous Dalit-Bahujan articulations. In fact, Dalits and the Other Backward Classes (OBC) were the backbone of the mobilisation for a separate State through the various Joint Action Committees, popularly called JACs, in the struggle for a separate State that was envisioned to be inclusive and democratic. All these factors produced a robust public culture in Telangana and prompted many to believe that the politics of polarisation that the BJP-Rashtriya Swayamsevak Sangh (RSS) combine propagated would be repelled against the very spirit that Telangana represented.

However, in less than a decade, the BJP began to make inroads as demonstrated by the party’s growing presence during the general election in 2019 where they won a surprise four Lok Sabha seats, including one in Nizamabad defeating the sitting Telangana Rashtra Samithi (TRS) Member of Parliament and Telangana Chief Minister K. Chandrasekhar Rao’s daughter, K. Kavitha.

This momentum by the BJP seems to be continuing with its win in the recent by-poll in Dubbaka, followed by 48 seats in the Greater Hyderabad Municipal Corporation elections from an earlier count of four seats. This may not be an aberration, as All India Majlis-E-Ittehadul Muslimeen (AIMIM) leader Asaduddin Owaisi would have us believe but could well indicate an emergent trend leading up to the next Assembly elections.

The BJP is putting in extra efforts to maintain the swing in its favour, as it is doing so in West Bengal and Tamil Nadu. This is significant for the BJP not only for the State Assembly elections in 2023 but also in compensating for a possible loss of seats in the Hindi heartland in the 2024 general election.

Today, democratic and progressive voices in the State, while taken by surprise by the sudden surge of the BJP, feel that it is necessary ‘punishment’ for the model of governance put in place by the TRS under Mr. K.C. Rao. He offered a highly centralised model that undermined various social mobilisations that were the force behind the formation of Telangana apart from weakening the Congress — 12 Congress MLAs joined the TRS in 2019. This culture of defection marked a realignment, with many known leaders of the Telugu Desam Party (TDP) shifting to the BJP. The vacuum caused by the lack of an effective Opposition that is necessary in democracy is today being filled by the BJP. The State government has filed cases under the Unlawful Activities (Prevention) Act on 78 social activists, including a well-known journalist and Section 123 of the Indian Penal Code (Concealing with intent to facilitate design to wage war) in an earlier strike.

In a sense, Mr. Rao began to undermine the very spirit of Telangana that he vouched to represent in the days of the struggle for a separate State. Even basic public protests for issues related to Dalits, Adivasis and the youth were routinely denied permission. There was an active process of demobilisation that was sought to be compensated by welfare and doles to different sections of the society, but what this model of governance did over a period of time was to undermine and denigrate the regional spirit of taking pride in the very identity of Telangana on the one hand and creating a political vacuum on the other.

A kind of social movement

It is this social and political vacuum that the BJP is beginning to fill. Socially, the youth are among the first sections to have walked across and announced their support for the BJP that projects itself as both ‘anti-establishment’ and an ‘outsider’ to the hegemonic political culture. With the additional but silent role of the RSS, the BJP becomes, by default, not just a political party but also a kind of social movement. Youth, who had earlier rallied for social demands of free and quality education, converting contractual jobs to full time government employment, today see the ideology of ‘Hindutva’ as a correction to the hubris of a Chief Minister finding resonance in the BJP’s pitch against the dynasty rule of Mr. Rao and his family. The BJP’s brand of nationalism becomes an ‘empty signifier’ for a moral correction of all that has gone wrong with the legitimate aspirations in a new State.

In more tangible political terms, the BJP is succeeding in stoking latent religious prejudices among caste Hindus and upper middle-class professionals, and the landed agrarian sections of society. It is also being aided by the heightened communal pitch of leaders such as Akbaruddin Owaisi. At the other end of the social ladder, with the decline of the TDP that enjoyed a large support base among the OBCs, much of the OBC social base has now moved to the BJP; the visible faces of political leadership of the BJP today Mr. T. Raja Singh Lodh and Bandi Sanjay Kumar belong to the OBC community. This has further established the credentials of the BJP as a bottom up ‘subaltern’ party close to the ground. This is in turn linked to the muscular mode of the functioning of some of these leaders and caste groups that is now taking the shape and content of aggressive Hindutva politics.

Notes for the TRS

One has to wait and watch to see whether the TRS does course correction, which would mean allowing space for social mobilisation, bringing back issues of education and employment, opening channels of communication with academics, journalists, government employees and social activists raising the concerns of Dalits and tribals. It would also mean extending an olive branch to the youth, creating more employment and continuing with the various welfare schemes that the TRS had successfully put in place. It would above all require Mr. Rao to eschew hubris and return to representing the spirit of Telangana. 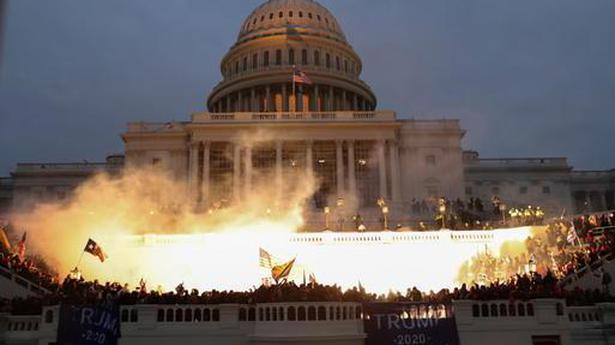 In pictures: U.S. Capitol locked down after Trump supporters clash with police