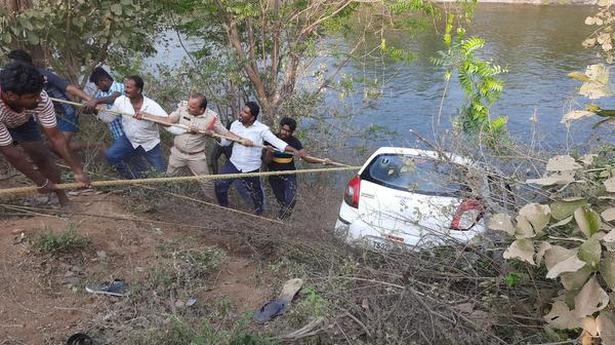 
Three members of a family drowned in Sri Ram Sagar Project (SRSP) main canal after the car they were travelling in plunged into it near Medipalli in Jagtial district in the early hours of Monday.

She said that the accident took place around 5.40 a.m. on the outskirts of Medipalli when Rao lost control of the wheel, veered off the road and plunged into the canal.

A resident of Jagtial town, they were going to their native place Joginpalli in Korutla mandal to attend Sri Venkateswara Swamy Jatara.

According to Ms. Sarma, the victims, distant relative of Jagtial MLA Dr. M Sanjay Kumar, started from their residence at 5.05 a.m. and the accident took place at 5.40 a.m.

Soon after the car plunged into the canal, they rolled down the window glasses and tried to get out. Mr. Jayanth had managed to come out from the car, and got hold of the motor pipe and climbed up, the officer said.

Locals and passer-by informed the police and rushed to the spot to rescue them, but in vain. The car was pulled out from the water and their bodies were shifted to Government Hospital in Jagtial for autopsy. Later they were handed over to the family members.

A similar accident had taken place in Warangal rural district in which a government teacher and two others drowned in SRSP canal after the car they were travelling in, plunged into it near Parvathagiri.

The victims were Pasula Saraswathi, school assistant from Rangasaipet, Veerla Sridhar (38), a fertilizer shop owner from Hanmakonda, and his employee Bhairi Rakesh (28). Another occupant of the car, Vijay Bhaskar, sales manager at Sridhar’s store, managed to swim out, while others died on the spot.

The duo were going to Dharmapuri to unveil their father’s statue when they swerved to left side of the road to avoid hitting an oncoming vehicle. Airbags in the vehicle were released during the crash and the duo escaped without any injuries.