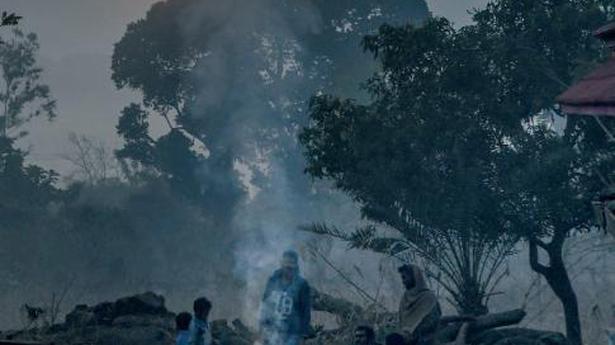 Plummeting mercury levels and easing COVID-19 situation in Lammasingi, Araku and other Agency areas in Visakhapatnam district are drawing nature lovers starved of outings in droves

The dip in mercury levels in the Agency areas is once again drawing tourists in droves to picturesque locations like Lammasingi, Araku, Chaparai and Borra Caves in Visakhapatnam district for the past few weeks.

The lowest temperature recorded in the Agency so far this season was 9.20C, at Chintapalli on November 10. The temperature at Lammasingi, popularly known as Lambasingi, is estimated to be 20C below that of Chintapalli, in the absence of a weather observatory there.

A drastic fall in temperatures at Lambasingi is normally witnessed every year towards the end of December and the first two weeks of January. The lowest temperature of 1.50C was recorded at Chintapalli on January 14, 2012 and again on December 31, 2018. Based on these readings, the temperature at Lambasingi was estimated at 00C on those days and no wonder, Lambasingi has earned the sobriquet ‘Andhra Kashmir’.

The undulating hills, verdant valleys, streams and waterfalls in the tribal areas make tourists fall in love with nature. The yellow carpet of niger flowers, spread out over large areas in the valleys, offers a feast to their eyes. The chilly weather and the almost pandemic-free hilly areas are once again drawing tourists in sizable numbers.

“The weather is excellent and tourists are enjoying the foggy mornings. There is no COVID-19 impact in Araku. Newly married couples, who failed to enjoy their weddings in view of the restrictions imposed due to the pandemic, are coming here for photo shoots. The yellow flowers, which bloom in November, are an added attraction for them,” Umesh, the manager of a hotel at Araku, tells The Hindu.

“The tourist rush has been picking up for the last couple of weeks. All rooms are full during the weekends. A large number of tourists are coming from Hyderabad and other parts of Telangana, which is indicated by the ‘TS’ registration on their car number plates,” he says.

The weather is excellent and tourists are enjoying at Lambasingi but the residents of Tajangi, an interior village, are not allowing tourists to enter the place due to COVID-19 fears, he adds. Cheruvula Venum reservoir at Tajangi with thick fog and silver clouds hovering over it is a tourist’s delight.

“The occupancy at our resorts is gradually picking up. The average occupancy is around 40% on weekdays and double that figure during weekends. Lack of regular trains and limited flights have made a huge dent in tourist arrivals, particularly Bengali tourists, who come in large groups during the festival season,” says AP Tourism Development Corporation (APTDC) Divisional Manager T.G. Prasad Reddy.