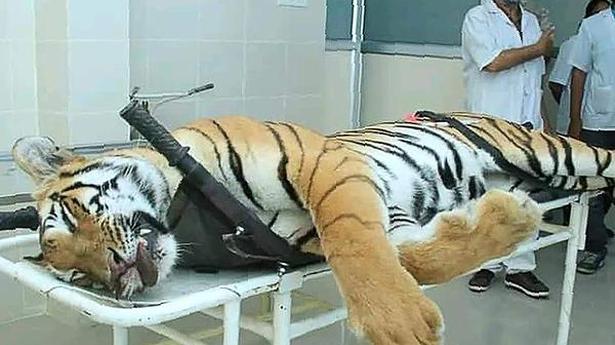 The Supreme Court on Wednesday prima facie said “celebrations” after the killing of tigress Avni in November 2018 “clearly violated” the law.

A Bench led by Chief Justice of India Sharad A. Bobde issued notice to Vikas Kharge, Principal Secretary, Department of Revenue and Forests, Mumbai, and other Maharashtra forest department officials on a contempt petition filed by activist and petitioner-in-person Sangeeta Dogra.

“There should be no celebrations or rewards… On this, we issue notice,” Chief Justice Bobde orally observed.

The court also decided to examine the claim that the tigress was really a man-eater.

Ms. Dogra had submitted that human nails, hair and teeth were not found inside the animal during the autopsy. The court asked Ms. Dogra to establish her claim.

It also asked for the autopsy report. “We want to see a clear finding that human hair, nails, teeth do not disintegrate within six months,” Chief Justice Bobde said.

Avni, which is claimed to have killed 13 villagers, was reported to have been shot dead near Borati village in Yavatmal by a team of forest officials and civilian hunter Asgar Ali.

The incident triggered an outrage among wildlife activists, who alleged that no efforts were made to tranquillise Avni and called it “murder in cold blood.”

Officials had, at the time, said a team of three forest department personnel and Mr. Ali shot the tigress, officially known as T-1, on the Borati-Warud Road in Yavatmal, news reports said.