Digitisation will result in a rapid growth and use of greater technology would enhance ease of doing business for the banks and its customers across the country, she says

Digitisation in the banking sector would result in a rapid growth and use of greater technology would enhance ease of doing business for the banks and its customers across the country, Union Finance and Corporate Affairs Minister Nirmala Seetharaman said here on Sunday.

Speaking at the inauguration of the centenary year celebrations of Tamilnad Mercantile Bank Limited (TMB) here, she said that digitisation could not be avoided and private banks such as the TMB, which had a rich tradition, should adapt to the next generation technology.

Gone were the days when people asked for opening of new bank branches. With digitisation, the entire business could be done irrespective of the geographic location, she said.

The Prime Minister’s Jan Dhan programme had made it possible for the marginalised people in society to lead a meaningful life today. Quoting the Prime Minister, she said that no matter whether he/she had money, the government should help them open an account first. With the Rupay card and insurance cover, the scheme had become a reality that several thousands of people selling on road-side approached the banks for loans.

The Jan Dhan programme, Ms. Seetharaman said, had greatly helped the micro-segments avoid borrowing from private money lenders and thus the economically weaker sections benefited in a big way. “Business is not just the prerogative of the rich, but should be possible even for the poor,” she stressed and lauded the role of the TMB in uplifting the poor by giving them small advances at nominal rates.

Showering encomiums on the TMB’s growth, the Finance Minister said, doing business in the right way for 100 years was a big challenge. Even when the bank faced some issues in the past and which appeared like a storm, the bank sorted them amicably. “ I wish TMB many more 100 years…” she noted.

Praising the Nadar community for their financial discipline in doing business, she said that the TMB, which was started as a Nadar bank, has universal acceptance today in the banking sector. Started in Raja Veedhi in 1921 in Thoothukudi, the bank has ₹ 41,000 crore as deposits and ₹32,000 crore in advances.

The TMB MD and CEO, K.V. Ramamurthy, who in his welcome address, touched upon the focus on priority sector advances and its tradition in catering to the farmers, small traders and MSMEs, the Finance Minister said that the TMB stood as an example to other banks in Tamil Nadu.

She said that after 2014, when many public sector banks were faced with problems such as NPA (non-performing assets), the Centre stepped in. Today, prompt corrective action had restored normalcy in the PSBs. The policies of the Centre such as the Emergency Credit Guarantee Liquidity Scheme for the MSMEs during the COVID-19 pandemic had made them come out of the crisis.

Quoting the Prime Minister, she said, banking was the right of every individual and hence, she appealed to all the banks to focus on giving advances to the economically weaker sections as the economy would grow in an even pattern.

Ms. Seetharaman said that in the last 8 to 9 months, the nation had administered the vaccine to 73 crore people, who had taken at least one dose. This was a big achievement and said that the Centre focused on the hospitals in smaller cities for enhancing bed strength and oxygen availability and among others.

TMB vice-president A. Chidambaranathan proposed a vote of thanks.

On the occasion, the Finance Minister released a postal card and a stamp marking the centenary year celebrations. She also flagged off a mobile vaccination campaign vehicle and a mobile digi-lobby vehicle which would go to customers’ doorsteps. 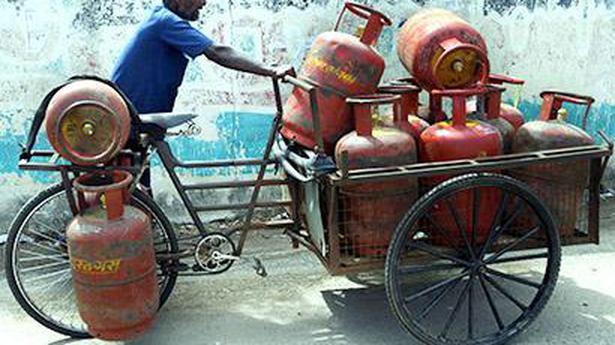