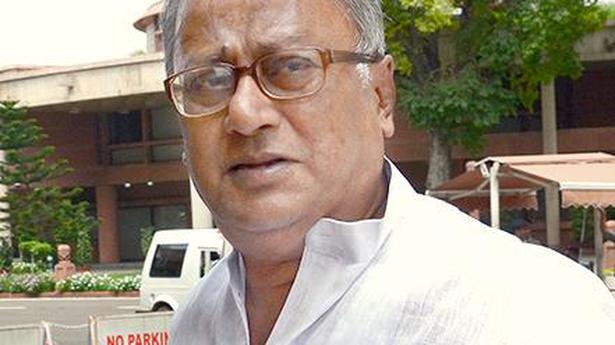 
The ruling TMC in West Bengal on Feb. 7 slammed Prime Minister Narendra Modi for his hard- hitting comments against Chief Minister Mamata Banerjee and urged him to soften his stand on the ongoing stir against farm laws and show some “Mamta” (compassion) towards agitating farmers.

Prime Minister Narendra Modi during the day made a scathing attack at the TMC government, saying it has “criminalised politics, institutionalised corruption and politicised the police” and said the people of the State expected ‘Mamta’ from Mamata Banerjee but got ‘nirmamta’ (cruelty) instead in the last ten years.

Reacting to Mr. Modi’s barb, Senior TMC MP and spokesperson Saugata Roy said the people of Bengal would show the BJP “Red card during the elections”.

“Instead of blaming Chief Minister Mamata Banerjee, the Prime Minister should soften his stand on farmers issue and show some ‘Mamta’ towards the agitating farmers, who are protesting for the last 70 days.

“So many farmers have died, but we could not see Modiji’s ‘Mamta’. When so many people died during demonetisation in 2016, we did not not see any ‘Mamta’ from him. The less he talks about ‘Mamta’, the better it will be,” Mr. Roy said.

While speaking about PM Modi claiming that “people will show ‘Ram Card’ as the TMC government has committed several fouls”, he said the people of Bengal would show “red card to the BJP in the Assembly polls”.

Referring to allegations that Ms. Banerjee losses her cool after hearing “Bharat Mata ki Jai” slogans, he said these are baseless allegations.

“Mamata Banerjee has never lost her cool on hearing ‘Bharat Mata ki Jai’ slogans. It was when political-religious slogans such as ‘Jai Shri Ram’ are raised she gets angry. It is completely justified,” he said.

The CPI(M) leadership denied the allegations of “match- fixing” between them and the TMC and said it is the Trinamool Congress that has helped the saffron party grow in Bengal.

“Why are both the TMC and the BJP bothered about the CPI (M)? Both have said that the Left has ceased to exist in Bengal.

“The Left has never compromised with the TMC in Bengal, it is the BJP which had an alliance with the Trinamool Congress till a few years back,” CPI(M) Legislative party leader Sujan Chakraborty said.