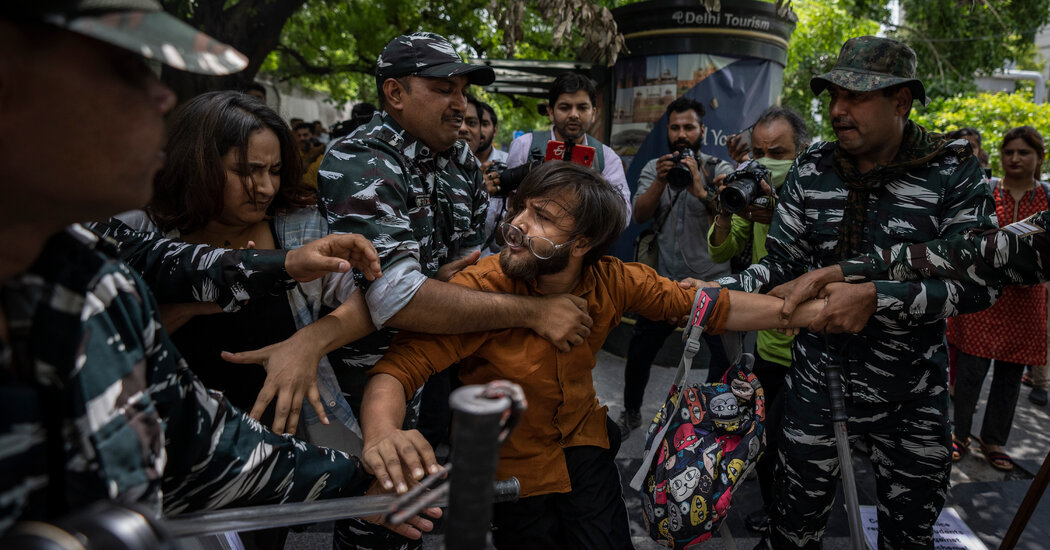 
NEW DELHI — Thousands of young Indians took to the streets in angry demonstrations on Friday, blocking trains and setting fire to railroad cars and tires to protest a cost-cutting move by the government that they say will shatter their dreams of a more secure job in the military.

The protests began on Tuesday after the government of Prime Minister Narendra Modi announced changes to how it would recruit new members of the armed forces. By Friday, demonstrations had turned violent and spread to multiple states and the capital, New Delhi.

At least one person died, and several others were injured. The casualties occurred in the southern state of Telangana after the police opened fire to dispel the crowds, according to a hospital and witnesses.

The government has described the moves as essential to making the country’s armed forces “younger, fitter” and more “diverse,” but many experts say it is aimed at reducing the country’s defense budget, more than half of which is spent on salaries and pensions.

Under the new system, 46,000 people aged 17 and a half to 21 would enroll this year, to serve four years. After that, up to 25 percent of them would be eligible to continue with a longer military career. The rest would get a small payout at the end of their service, but no pension.

Hundreds of thousands of young people seeking job security in a long-term military career saw the announcement as another blow to their dreams.

“What will we do after four years?” said Prince Raj, 23, who is from the eastern state of Bihar and hopes to become a soldier. “Who will give us a job? Our protests will continue until the government accepts our demands.”

The protesters have called for the government to scrap the new plan outright and instead maintain the policy that had the prospect of a career that might last two decades and a pension at the end of it.

“We spend three to four years preparing to get selected and after that, if we get a job for four years, that is not fair,” said Pankaj Pundir, 17, from the district of Muzaffarnagar in the northern state of Uttar Pradesh.

The growing discontent among India’s youth is a result of rising unemployment, in an economy that has struggled to put hundreds of millions of people to work in recent years. Economists have long warned of a slow rate of job creation, even as the pandemic pushed millions of educated, middle-class Indians toward poverty.

This year, hundreds of applicants for railway jobs burned train cars in the state of Bihar in protest against what they said were Mr. Modi’s government’s unfair recruitment practices. More than 12 million people had applied for 35,281 jobs.

In an acknowledgment of the unemployment woes, Mr. Modi this week ordered his government to recruit a million people into vacant government slots within 18 months.

“The announcement of a million jobs is good, but that will only be filling up the vacancies,” said Jayan Jose Thomas, an economist and professor at the Indian Institute of Technology in New Delhi. “Given the demographic structure of India, unless we are able to create more jobs, these kind of protests will keep on happening.”

As the protests spread, reaching multiple districts in at least six Indian states on Friday, Mr. Modi’s government announced some concessions on the new military recruitment plan. It would raise the upper age limit for the entry of new recruits to 23 years, allowing those who missed the opportunity of being recruited in the past two years during the pandemic to apply.

The concessions, however, did little to calm the anger unfolding on the streets and inside train stations in the states of Bihar, Uttar Pradesh, Haryana, Rajasthan, Telangana and Madhya Pradesh. The protests quickly spread to other parts of India on Friday, including New Delhi and the states of Odisha, West Bengal, Punjab and Jharkhand.

In Bihar, which has witnessed intense protests in the past few days, hundreds of protesters armed with sticks vandalized train stations and set fire to train cars on Friday. Violent mobs blocked railway tracks by burning tires and vehicles on them.

Similar scenes played out in Uttar Pradesh, where protesters destroyed trains, buses and shops. Hundreds of protesters, mostly men in their 20s, took to the streets and shouted slogans in the district of Chandauli.

In the state of Telangana, police officers and firefighters tried to extinguish a burning train car that a mob had ignited. Tensions remained high in the state of Haryana, where the authorities cut off the internet on Thursday and Friday to keep the protests from spreading.

“They will kick us out after four years,” Lavjinder Singh, a young Army aspirant in the state of Haryana, told local news media, explaining that he had been training for the past seven years to be considered for a slot. “What will those 75 percent people do?”

Ranjeet Kumar, a former Indian Army soldier who runs a training academy of 100 army aspirants in Bihar, said the protesters were also frustrated because of delays in the recruitment process. Their demands, he said, were justified.

And, he said, one thing was clear: “They are not interested in joining the army for four years. They want to join the army for full tenure.”

The protests have come as India is facing a situation it has feared for nearly two decades: a two-front conflict with hostile neighbors, China and Pakistan, both nuclear armed. The Indian and Chinese militaries have been stuck in a border dispute in the Himalayas for more than two years.

India has one of the world’s largest armies, recruiting tens of thousands every year. Military experts say one way to manage such a large army and still afford updates to its defense equipment is to recruit potential soldiers on short-term contracts.

But the jobs themselves must be made “attractive,” both during the years of service and after, said H.S. Panag, a retired lieutenant general, who served in the Indian Army for nearly four decades. They should also not appear to be “exploitative,” Mr. Panag added.

The government plan announced on Tuesday falls short on both counts, he said. “It seems to be exploitative because they have not given all the incentives they are talking about,” including “assured guarantees” for recruitment in paramilitary forces. The military job package would pay only about $15,000 in total, far less than what a soldier would make after about 15 years of service.

Economists say the government also needs to urgently focus on creating jobs. Aside from the defense sector, which employs more than 1.3 million people, other fields like education and health can absorb hundreds of thousands of job seekers, Professor Thomas said.

“A very large number of the working-age population is looking for jobs,” he said. “And they look for regular employment with safety, which only government jobs provide.”

Mr. Raj, the Army aspirant from Bihar, pointed out that the government’s recruitment plan targeted the most vulnerable in India. “It’s only the poor families whose sons join the army and sacrifice their lives,” he said. “Which politicians’ sons sacrifice their lives in defending the country?” 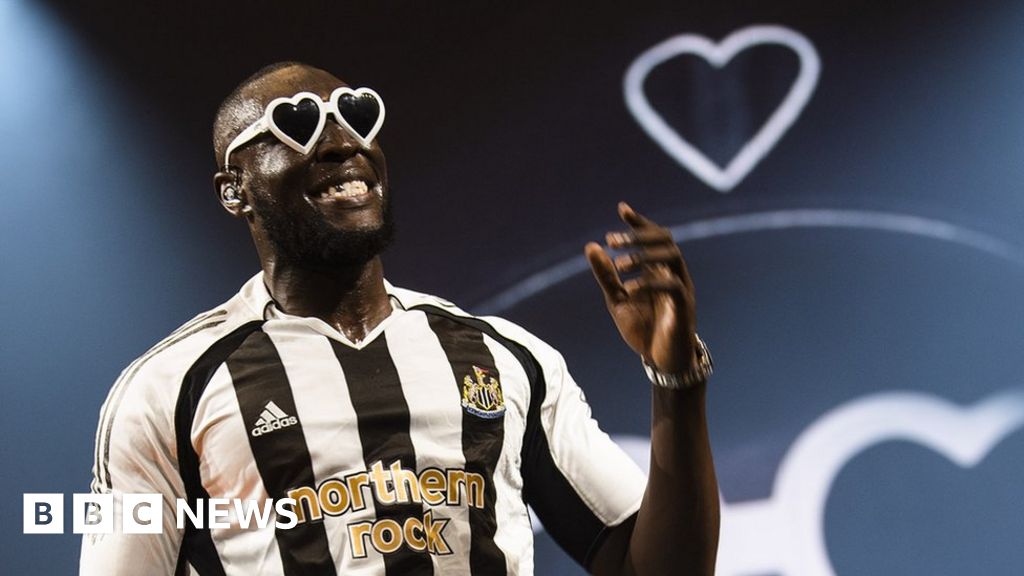 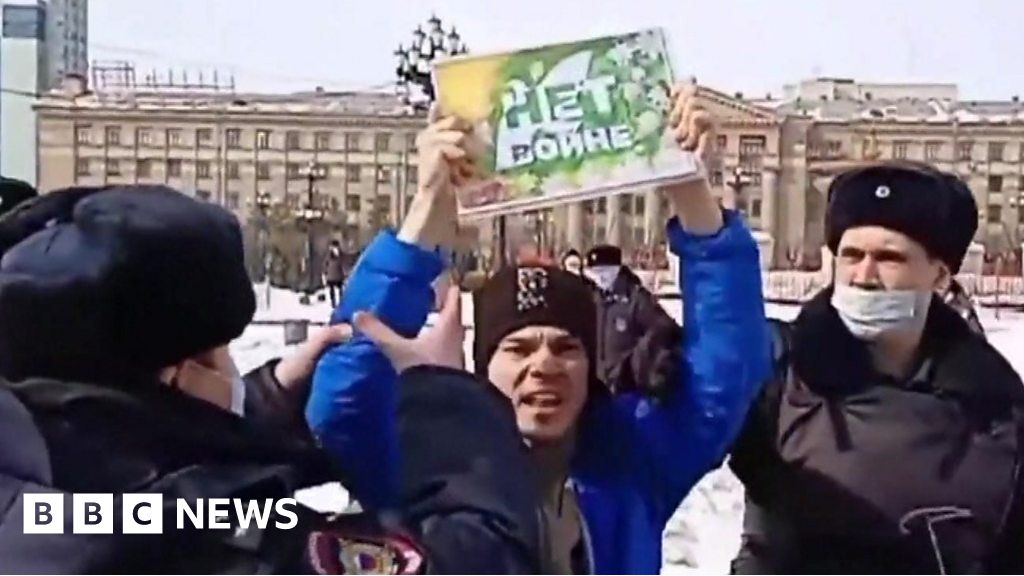 Four times Russians have stood up for Ukraine 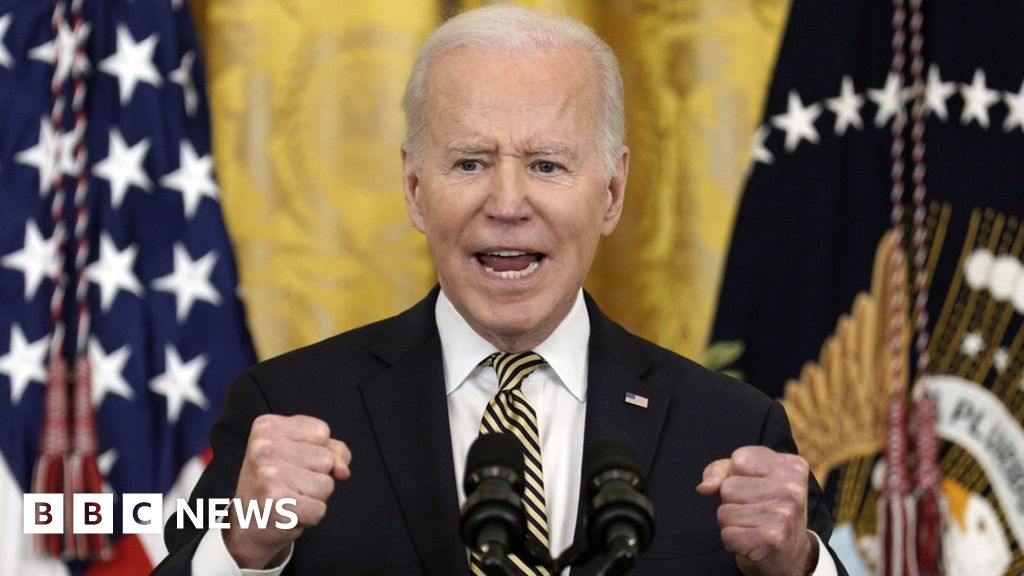