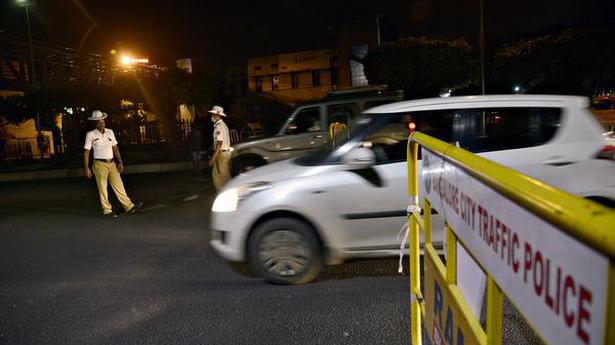 
After a gap of almost a year, the Bengaluru Traffic Police on Wednesday decided to restart special drunk drive checks across the city. The decision was taken after several instances of fatal accidents where motorists were later found to be driving under the influence of alcohol.

“We stopped drunk drive checks last March due to enforcement of COVID-19 guidelines and also keeping in mind the safety of the traffic personnel. However, with the increase in accidents and drunken driving cases, it was decided to launch the drives with a set of safety guidelines,” said B.R. Ravikanthe Gowda, Joint Commissioner of Police (Traffic).

Another senior traffic official said they had no choice but to restart the drive as bars, theatres, restaurants, and malls were functioning as normal. However, traffic personnel on the ground are worried about contracting COVID-19 in light of two clusters in the city.

“A motorist driving under the influence of alcohol will not follow protocols or safety guidelines. They will not cooperate with constables,” said a traffic cop, who did not wish to be named. A traffic officer, on condition of anonymity, pointed out that it was not possible to conduct drunk driving tests without physical proximity. “To book a single such case, police personnel have to check a minimum of 20 vehicles on an average. We will put ourselves and our families at risk. With talk of a second wave and other cities recommending stringent restrictions, the government should postpone these drives,” said the officer.

He added that it was not financially feasible given that the government will have to bear the medical expenses if they contract COVID-19.

However, senior traffic officials are confident that the protocols and guidelines put in place will mitigate the risk. Mr. Gowda said the alcometer device should be sanitised and kept in ziplock covers. “One equipment should be used for a single drive and separate straws for every check,” he said.

Personnel involved in the drives should wear masks, gloves, and face shields, and must sanitise their hands after every check. After use, the equipment should be sanitised properly and not be used for the next three days. The guidelines also state that the traffic police must sanitise their hands in front of motorists before they conduct the breathalyser test to ease their fears.

Senior police officials expressed hope that the special drives will minimise fatal road accidents. “Members of the public should cooperate with the police,” Mr. Gowda added.

The decision to restart the drives was taken after a circular was recently issued by Pratap Reddy, Additional Director General of Police (law and order), directing the police to step up enforcement to minimise fatal road accidents. Mr. Reddy had also given targets to the police warning that disciplinary action will be taken if the enforcement is not strictly implemented. Mr. Reddy told personnel to also crack down on rash and negligent driving, using mobile phones while driving, and not wearing helmets or seatbelts. The police have also been directed to act against minor motorists and book cases against their parents.

Lack of seroprevalence data may prove costly for State