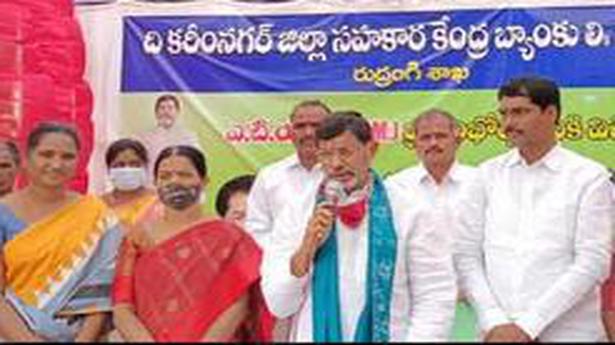 
Konduru Ravinder Rao, Chairman of National Federation of State Cooperative Banks (NAFSCOB), Telangana State Apex Bank (TSCAB) and district cooperative central bank (DCCB), has called upon the farmers to treat agriculture as a business enterprise to the reap the riches.

“Agriculture is not just a substitute in this present world of competition and the farmers should treat it as a business enterprise. The farmers should double their income by cutting down expenditure in farming with the mechanisation, reducing the use of pesticides and fertilizers and by using organic fertilizers and also by cultivating commercial crops,” he pointed out.

Mr. Ravinder on Tuesday went on a whirlwind tour of Rajanna-Sircilla district participating in various developmental works of the bank in the interior villages. He inaugurated the DCCB’s 32nd ATM centre in Rudrangi village, participated in a meeting with the PACS members of Chandurthi mandal and also visited the once Naxalite bastion village of Manala abutting the forests adjoining Nizamabad district, where the villagers have formed into society and joined the Karimnagar DCCB.

Speaking on the occasion, he said that the farmers cannot reap riches by doing farming of cultivating conventional crops like paddy and cotton. They should process and add value to their products through rice mills and ginning mills respectively before branding and marketing, he stated. He also called upon the primary agricultural cooperative societies (PACS) to provide mechanised tools to the farmers on rent to reduce the farming costs and increase yield.

At Manala village, which was merged with the Rajanna-Sircilla district from the adjoining Nizamabad district, he assured to sort out all the issues and take up regular lending of loans for agriculture and other purposes for the prosperity of the villagers. He also urged the farmers to take up dairy units along with farm operations to get a regular source of income and also organic manure for the fields. Zilla Parishad chairperson N. Aruna, DCCB vice-chairman P. Ramesh, DCCB CEO N. Satyanarayana Rao, general manager Sridhar and others were also present.