Officials of the Greater Visakhapatnam Municipal Corporation (GVMC) on Thursday came under fire from environmentalists and denizens after several trees and plants were uprooted outside Mayor G. Hari Venkata Kumari’s residence to create parking space, at Arilova.

Videos and pictures that were posted by passersby and local residents on social media websites and messaging apps on Thursday showed earthmoving machines uprooting several trees and plants in a 200-metre stretch outside the Mayor’s residence, and trucks carrying away soil removed from the area to create a level parking space. The incident sparked anger among environmentalists and denizens who demanded strict action against civic officials responsible for the incident. Denizens also expressed their disappointment with the Mayor, saying she should not have allowed such an incident to happen.

Responding to the criticism coming her way, Ms. Hari Venkata Kumari said that after becoming Mayor, scores of people were coming to meet her at her residence every day causing traffic snarls in the area. “Thinking of a way to sort out the traffic problem, we decided to cut some trees and create some parking space. It was not our intention to damage the green belt and I assure everyone that the green belt will be developed once again,” she told reporters.

Meanwhile, after locals began objecting to the felling of trees, the GVMC workers stopped their work and left the site.

When asked for her response, GVMC Commissioner G. Srijana said that there was a requirement for parking space outside the Mayor’s residence. “We had suggested that the service road be used for parking vehicles. However, some workers from the engineering department of the civic body overstepped into the green belt, which is absolutely objectionable. The officials responsible will definitely face action over the issue,” Ms. Srijana said, adding that the green belt will be restored to its original extent. 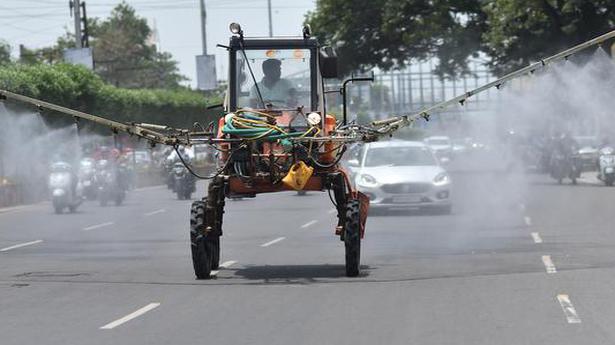