The Chenchu and Sugali communities of the remote Palutla plateau are setting an example in bonhomie by unanimously selecting the sarpanch as envisaged by the State government for speedier development.

The hamlet, comprising 800 voters, have decided to elect as their sarpanch Karamthot Haninibhai, a woman from the Sugali community.

“The goal is to put the tribal village with low development indices on the path of progress,” says Chevula Anjaiah, an elderman from the Particularly Vulnerable Tribal Group (PVTG).

The remote village is not just the first polling station in Prakasam district but also the home of tribals who have been living in complete harmony with the environment of the Nallamalla forests, a repository of rare species of flora and fauna.

Officials responsible for holding elections used to visit the difficult-to-access habitation once in five years and that too by pressing into service a helicopter.

Politicians skip the newly-formed gram panchayat which has been hitherto part of Venkatadripalem earlier while canvassing for votes in view of the inhospitable terrain of the PVTG habitation, where the tribals co-exist with big cats and other wild animals.

The tribals from less-populated Ponalabailu, Gutalachenu and Nekanti forming part of Palutla have been camping in Palutla ever since the notification for the four-phased local body elections was issued and campaigning in support of the Chenchu elderman for the post as a contest seemed to be unavoidable then.

“At this, we decided to sink our differences to collectively realise basic facilities, including electricity and a motorable road to Yerragondapalem,” says another Chenchu elderman Nimala Edanna while giving details of the power-sharing arrangement during a conversation with The Hindu.

Accordingly, a Chenchu man Kudumula Bayanna has been named Upa-Sarpanch (deputy sarpanch) and five others as ward members in the village which has eight ward member seats.

The roles will be reversed after five years. “We decided to bury the hatchet for the sake of development,” says Ms. Haninibhai while vowing to achieve a motorable road to the plains to take the sick to hospital so as to not miss out on the golden hour for survival.

They are a happier lot as they could achieve piped water supply to all houses in the clean and tidy village with a population of 1,700 people. They have started tasting the fruits of development after distribution of land under Recognition of Forest Rights(ROFR) Act by taking to cultivation of commercial crops including chillies and cotton, they add. 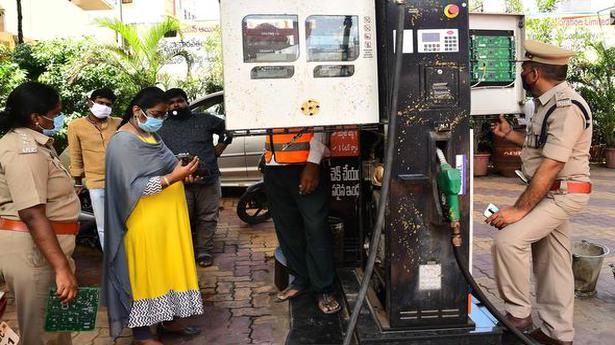