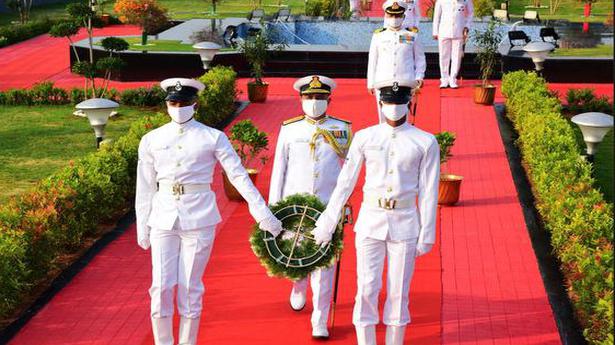 
The Eastern Naval Command on Wednesday observed the commencement of the 50th anniversary of Vijay Diwas being celebrated as ‘Swarnim Vijay Varsh’ by paying tributes to the personnel of the Armed Forces who died during various operations in the 1971 War.

A 50-man Guard was paraded at the venue and a two-minute silence was observed as a mark of respect to the martyrs.

Various commemorative events are planned across the nation as part of the 50 years of the India-Pakistan war.

The country celebrates Vijay Diwas on December 16 every year to commemorate the victory against Pakistan in the 1971 war.

On this day, 49 years ago, over 93,000 Pakistani troops under the command of Lieutenant General A.A.K. Niazi raised the white flags and surrendered unconditionally at Dhaka, in the presence of the three tri-service Commanders of Indian Armed Forces.

It was on this day in 1971, that a declaration of the ceasefire was brought into force ending the Indo-Pak War and resulting in secession of East Pakistan to the sovereign country of Bangladesh.