The Tirumala Tirupati Devasthanams (TTD) has resolved to construct a temple for goddess Padmavati in Chennai with an estimated budget of ₹6.85 crore. The temple is proposed to be built in a 14,880 sft site in the GN Chetty Street in the heart of the city.

The land, with the current market value of more than ₹30 crore, was donated by noted South Indian actress P. Kanchana.

Initially, it was planned to construct the temple with ornamental brick work and the Rajagopuram with stone. The total cost of the project was pegged at ₹5.75 crore. Tenders were also finalised.

Meanwhile, TTD trust board member and president of Local Advisory Committee (LAC) at Chennai, A.J. Sekhar suggested using of granite stone for the construction of the temple akin to the ones built in Hyderabad and Kurekshetra. He contended that the use of granite would not only enhance the grandeur but also replicate the age-old temple architecture.

He also assured to pool the additional expenditure of ₹1.10 crore as donations as per the TTD norms when the engineering officials submitted that the revised work estimates would go up to ₹6.85 crore as against earlier etimate of ₹5.75 crore.

After discussing the issue threadbare, the TTD has decided to entrust the works relating to the construction of RajaGopuram at an estimated cost of ₹1.10 crore (equivalent to the additional cost) to Mr. Sekhar and take up the remaining works sich as construction of the temple, Mukha Mandapam and Prakaram on its own. 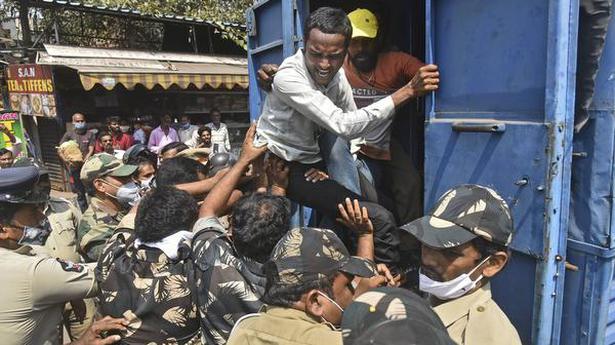