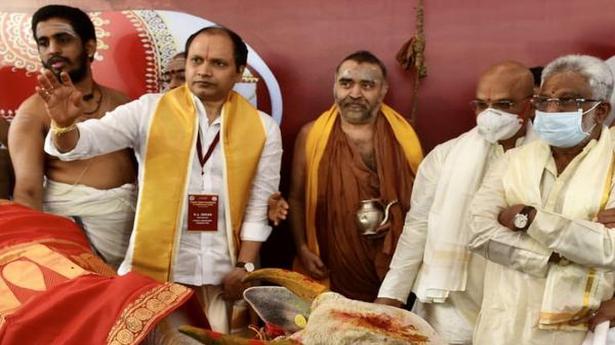 
The Tirumala Tirupathi Devasthanams (TTD) has written to the Union government seeking COVID-19 vaccination to its frontline employees who are managing thousands of devotees each day at Tirumala, its Chairman Y.V. Subba Reddy said in Chennai on Saturday.

Mr. Reddy told The Hindu that 2,500 employees handling queues, counters, security, darshan etc were identified as frontline warriors since an average of 55,000 devotees were visiting the hill temple daily.

“We have written to the government of India to include our staff in the list of frontline corona warriors who are managing the pandemic. We are also pursuing the matter with the State government to facilitate the vaccinations at the earliest,” Mr. Reddy said.

About 25-30 employees were infected with COVID-19 of whom two employees died due to comorbidities. The number of devotees visiting the temple, which was restricted to 5,000 in June 2020, was increased in a phased manner. “Now we have an average of 55,000 devotees per day. Before the pandemic, it used to be around 85,000 on weekdays and more than a lakh on weekends.”

Mr. Reddy said the hundi collection had increased from ₹30 lakh (per day) when the temple was opened after the lockdown to an average of ₹2.75 crore in the last two months. The revenue deficit this fiscal was expected to be ₹650 crore. Though there was a drastic fall in the hundi collections, the main source of income, the TTD managed to sustain routine activities in its education and healthcare services.

The TTD Chairman said the interest accrued from fixed deposits before the pandemic, about ₹14,000 crore, was sufficient to manage the establishment cost including salaries, educational institutions, hospitals etc. “At the rate of about 8% we used to get ₹120 crore as interest alone. The rate of interest was reduced to 3.5% …in January this year it was increased to 4%,” he said.

Asked whether the TTD had any plans to diversify its investments pattern, Mr. Reddy said venturing into new avenues of investments would come with an element of risk. “This is the hard-earned money of the devotees and we cannot afford to take any risk,” he said.

Mr. Reddy said the viewership of the Sri Venkateswara Bhakti Channel (SVBC) had touched 8 crore. The TTD had introduced advertisement-free programmes following feedback from the viewers. Some devotees, most of them NRIs, were offering donations for the devotional channel. The cyber security wing had registered cases against websites fleecing money through fraudulent darshan packages.