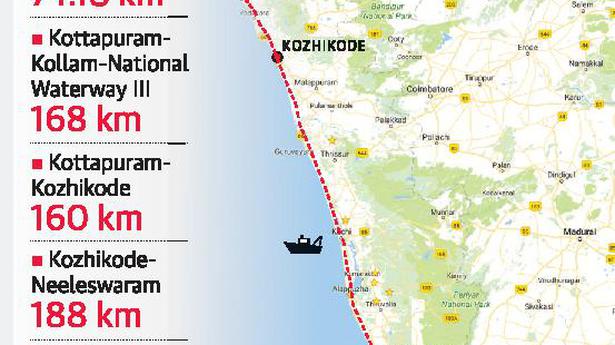 
The 60.5-km Akkulam-Kollam waterway stretch will be navigable soon with the revival of two tunnels at Varkala.

With this, inland water transport will be possible on the Akkulam-Kottapuram stretch of the 633-km West Coast Canal (WCC), the main arterial waterway in the State, traversing through 11 districts.

For the Inland Navigation Department, the prime challenge was the revival of the 722-metre Sivagiri tunnel and the 350-metre Chilakoor tunnel on the Akkulam-Kollam stretch.

The Sivagiri tunnel, completed in 1880, is the only one of its kind in Asia. Concrete lining, provided between 1934 and 1942, had peeled off at several places and the tunnel was out of bounds for inland water transport. Dredging and reinforcement work were taken up to make the stretch navigable as part of the plan to extend the National Waterway-III up to Kovalam.

Boats will be able to move along the Sivagiri and Chilakoor tunnels as both have a diameter of 4.7 metres. Project officials say boats need only three-metre width to cruise along the tunnel. Works near both the approaches of the tunnel are to be completed.

Though the formal commissioning of the Akkulam-Kollam stretch will take place only after the local body elections, the authorities are planning to commence trial run of a 24-seater indigenously manufactured solar boat procured by Cochin Internation Airport Ltd. (CIAL) soon.

The government has also given the approval for the rehabilitation of the 60 families residing in the fringes T.S. Canal at Varkala through the Punargeham project of the Fisheries Department. Each family will be given ₹10 lakh, which includes ₹6 lakh for purchase of land and ₹4 lakh for building house. The families will also get ₹5,000 as rent for six months from land acquisition or till the compensation is paid, official sources said.

Kerala Waterways and Infrastructure Ltd. (KWIL), the special purpose vehicle created by the government, is in charge of the ongoing rejuvenation of the adjacent16.5-km stretch of the waterway from Kovalam to Akkulam that includes the Parvathy Puthanar.