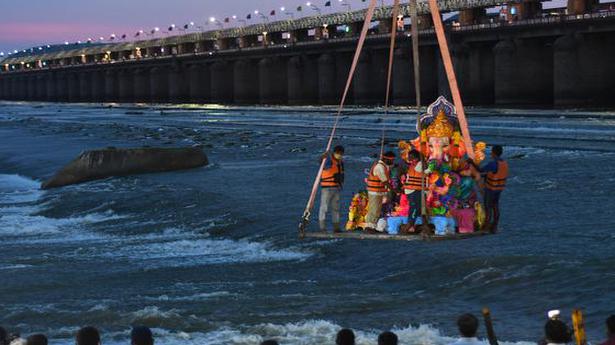 Two boys drowned in Nagarjuna Sagar Canal during the immersion of a Ganesh idol on Saturday. One body was retrieved and search is on for the second, the police said. They were identified as T. Eshwar Prasad (13) and K. Durga Rao (15), both natives of Inumalla village in Eepuru mandal.

In another incident, a six-year-old girl died on Sunday after a cement pillar, to which the rope of a Ganesh pandal was tied, fell on her while she was playing.

The girl, identified as Nandini, was a native of Madala village in Muppalla mandal, the police said.

West Godavari Superintendent of Police(SP) Rahul Dev Sharma said that 224 immersion points have been arranged along Godavari river and irrigation canals in the district.

“In all, 2,250 idols have been identified in the district. We made foolproof security arrangements at the ghats and immersion points. About 769 idols were immersed on the first day on Sunday,” said Mr. Rahul Dev Sharma.

In Krishna district, 551 immersion points have been arranged along Krishna river, Bandar, Eluru and Ryves Canals and at the coastal villages, said Krishna SP Siddharth Kaushal.

“As the Krishna river is in spate and the canals are overflowing, only three persons are being allowed for immersion. We request the devotees to cooperate with the police,” the SP said.