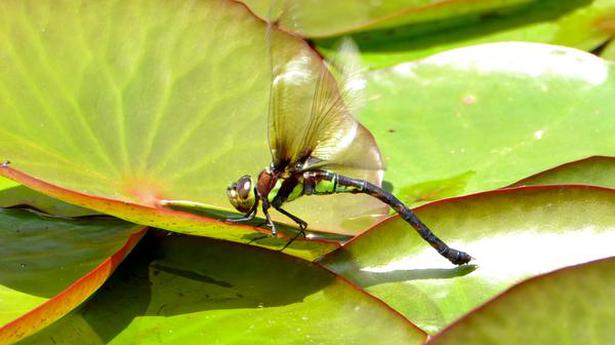 A “chance discovery” by a group of naturalists during the lockdown has led to the rediscovery of two rare dragonfly species in the Western Ghats, one of which after nearly nine decades.

They have been sighted for the first time in the State. The sightings, one of which as early as 15 years ago, have now found place in the Journal of Threatened Taxa.

Kalesh Sadasivan, a naturalist with the Thiruvananthapuram-based Travancore Nature History Society (TNHS), said the lockdown provided ample time to review several sightings photographed several years ago. Discussions with odonatologists and a peer review for publication in the journal threw light on the relevance of their findings.

He said Kimmin’s Reed tail, which evaded detection after its discovery in Thirunelveli in 1958, was spotted by him and Muhammed Jafer Palot, both members of the TNHS Odonate Research Group, at Kakkayam in the Malabar Wildlife Sanctuary in January 2006. It had been spotted six times later between 2012 and 2019 in the Peppara Wildlife Sanctuary and the Ponmudi-Kallar valley in Thiruvananthapuram and Shendurney in Kollam.

The sightings of Martin’s Dushkawker were recorded by Manoj Sethumadhavan and S. Jeevith of the Wynter-Blyth Association, Nilgiris, near the Ralliah dam in the Nilgiris in September 2014 and later by a TNHS team comprising Sadasivan and Baiju Kochunarayan in Munnar in June 2019.

Observing that the species drew similarities with Anaciaeschna donaldi, last spotted by English entomologist F.C. Fraser in Annamalai Hills in 1933, the research cited recent odonate studies that concluded the particular species as a junior synonym of Anaciaeschna martini (or Martin’s Duskhawker). (In zoological nomenclature, junior synonym refers to a name which describes a recognised taxon or biological unit with a different name.) While Kimmin’s Reed tail had been earlier known to be distributed in the Western Ghats, parts of north-eastern India, and Myanmar, Martin’s Dushkawker is distributed across Peninsular India, Sri Lanka, Nepal, and Bhutan till Japan.

Sadasivan called for studies to learn the status and distribution of species along the Western Ghats to understand the changing environmental condition of the biodiversity hotspot.