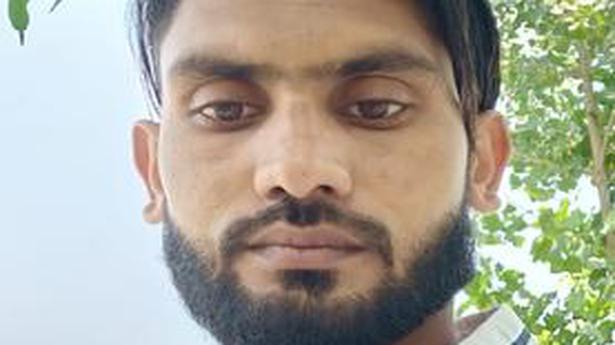 Woman defends him; Allahabad High Court extends stay on his arrest till January 15.

More than a month after booking Haridwar-based Muslim labourer under the new ordinance for allegedly trying to coerce and allure a married Hindu woman from Muzaffarnagar to convert, the Uttar Pradesh government has told the Allahabad High Court that it found no evidence of unlawful conversion against him and has dropped the charges.

However, police have filed a chargesheet against him in which he is accused of criminal intimidation.

Talking to The Hindu, the woman, 34, whose husband had lodged the case against the Muslim man, came out in support of the accused and denied that he had ever tried to convert her. She alleged that her husband had falsely implicated the Muslim labourer because he had supported her when she faced domestic violence and “mental torture” at home.

An FIR was lodged against Nadeem and an associate Salman at Mansoorpur under the Uttar Pradesh Prohibition of Unlawful Conversion of Religion Ordinance, 2020 on November 29, 2020 on the complaint of Akshay Kumar Tyagi, a contractor in a pharmaceutical company in Haridwar, who accused Nadeem of having an illicit relationship with his wife Parul and of trying to convert her to Islam for marriage.

Mr. Tyagi said Mr. Nadeem had gifted Ms. Parul an Oppo brand phone, which they used to secretly communicate with each other. On December 18, the Allahabad High Court stayed Mr. Nadeem’s arrest till January 7. On Thursday, a Division Bench of Chief Justice Govind Mathur and Justice Saurabh Shyam Shamshery extended the relief to him till January 15. This is the only case under the new ordinance so far in which the High Court had stayed the arrest of the accused.

No evidence of relationship

In a short affidavit filed in the Allahabad High Court on behalf of the State, Awadesh Pandey, Joint Director-Prosecution, on Wednesday submitted that the police had not found any evidence that Mr. Nadeem was having an illicit relationship with Ms. Parul “nor any evidence has come forward that he tried to change the religion of Parul”.

The chargesheet submitted by the Investigation Officer (IO) on December 31 was filed under Sections 504 and 506 of the IPC, while no evidence was found in respect of the new ordinance, Mr. Pandey said.

In her statement under Section 161 of the CrPC, Ms. Parul said she was only known to Mr. Nadeem but did not have any relationship with him and denied that he had tried to marry or convert her.

The IO, however, found through call record details that Mr. Nadeem had called Mr. Tyagi and allegedly threatened to kill him, said Mr. Pandey. Interestingly, in her statement while clearing Mr. Nadeem of the allegations under the new ordinance, Ms. Parul said Mr. Nadeem had threatened her husband when he [Mr. Tyagi] called to confront him [Mr. Nadeem] on their alleged illicit relationship.

Talking to The Hindu from Muzaffarnagar, Ms. Parul alleged her husband had the FIR lodged without consulting her and denied all charges made against Mr. Nadeem. “I don’t even know when the report was filed,” she said.

In the FIR, Mr. Tyagi had alleged that Mr. Nadeem, had “trapped” Ms. Parul in a “net of love” with the aim of converting her.

Ms. Parul denied that Mr. Nadeem was trying to convert her to his religion but admitted that she had friendly relations with him and the two spoke over phone. “Neither has anyone asked me to convert nor asked me for marriage. Now there is no law which prevents me from speaking to a Muslim,” said Ms. Parul.

According to her, Mr. Tyagi booked Mr. Nadeem because he intervened and supported her when she faced domestic violence and “mental torture” when the couple lived in Haridwar. Ms. Parul, who has two children, alleged that her husband would often beat her up, and she suspected that he had illicit relationships.

“My family was not supportive. Nadeem stood up to help me and would talk to me. We spoke on the phone normally. But it wasn’t like I wanted to elope with him or spend my life with him,” she said. “If I want to elope, then nobody can stop me. No law stops me from living with someone. But I didn’t do this,” she said.

In October last year, Ms. Parul had also lodged a complaint with the police chief of Haridwar, seeking protection and alleging that her husband wanted to harm her and Mr. Nadeem.

While granting relief to Mr. Nadeem in December, the High Court had said the allegations were prima facie based on suspicion and observed that Ms. Parul and Mr. Nadeem have a fundamental right to privacy and “being grown up adults who are aware of the consequences of their alleged relationship”.

Ms. Parul contends that though she would also discuss her problems with other friends, her husband lodged a case against Mr. Nadeem “only because he is a Muslim”.

Mr. Nadeem, a resident of Bhagwanpur in Haridwar, started working under Mr. Tyagi in the same firm and consequently developed a friendship with Ms. Parul and used to frequent their house. Mr. Tyagi said Mr. Nadeem had gifted his wife an Oppo F15 mobile phone, which she used to secretly communicate with Mr. Nadeem. Ms. Parul said that she had asked Mr. Nadeem to buy the phone as her husband had smashed her old phone in anger and snatched her SIM card. She feared physical harm could come to her. “What I was going through, if I didn’t talk to someone, maybe today I would be dead,” she claimed.

Mr. Nadeem alleged that Mr. Tyagi had him booked as he [Mr. Tyagi] suspected that he [Mr. Nadeem] had tipped off his [Mr. Tyagi’s] wife over his [Mr. Tyagi’s] alleged affairs. “He wrongly believed this because I was in touch with them. Yes, we would exchange our mann ki baat but there was nothing more,” he said from Haridwar.

“If anyone has seen me with his wife, I will myself plead guilty of the charges,” he said. “Tyagi-ji was aware we spoke to each other. If he thought I was doing something wrong, he could have slapped me and asked me to not enter his house,” he said. “I was made a scapegoat because I am a Muslim,” Mr. Nadeem said with reference to the FIR against him.

“What else could his objective be [than to convert her]?” he asked.

Mr. Tyagi admitted that he had broken his wife’s phone and dismissed the idea that it was a mere friendship between Mr. Nadeem and his wife. “Do friends speak on the phone at 2 a.m.?” he asked. “Tell me, what connection will a Muslim man have with a Hindu woman who has 15-year-old children?”

Mr. Tyagi also dismissed the allegation of domestic violence against him and asked, “Why does a Muslim boy have to interfere in someone else’s household? There is no house in India where there is no domestic trouble or disagreement. But how can an outsider take advantage of that?”

A questionnaire was sent on his request to the Deputy Superintendent of Police-Khatauli in Muzaffarnagar seeking details about the investigation into the case. A reply is still awaited. Bodies of Rajouri youths killed in encounter will be exhumed, say police