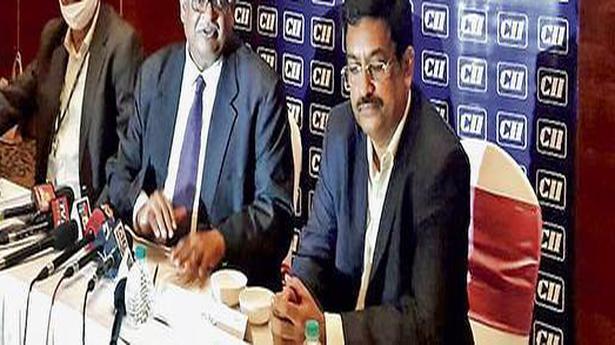 
Captains from both the public and private sector enterprises welcomed the Union Budget that was presented by Union Finance Minister Nirmala Sitharaman on Monday. They said that the Budget was dished out at an unusual time, especially when the world and the country was still grappling with the COVID-19 pandemic. But they said that it was futuristic with a lot of macro indicators.

“The budget focussed more on macro economy, keeping nation building in mind, and very little space for micro economy,” said Director (Commercial) of RINL and vice-chairman of CII (Visakhapatnam chapter), D.K. Mohanty. He was speaking at a meeting organised by the CII, post the budget session, here on Monday.

Datla Tirupati Raju, vice-chairman of CII, said that the budget addressed both the present and the future and has some spillover benefits for Visakhapatnam.

He pointed out that all segments have been addressed right from railways to road network and infrastructure building, paving the way for economy recirculation.

But the highlight was enhancement of expenditure in health and well-being from ₹94,452 crore to ₹2,23,846 crore. This will have some impact in the health care infrastructure in Visakhapatnam and in the State, said J. Srinivasa Raju, Chairman of CII (Visakhapatnam zone).

Chief Financial Consultant of Mahatma Gandhi Cancer Hospital & Research Institute Lalitha Sundari said that 137% hike in expenditure in health-care was phenomenal and for the first time emphasis has been laid on primary, secondary and tertiary health care. “We have to wait for the fine prints of the copy, but we are hopeful that some of the capital expenditure allocation will benefit the city and the State,” she said.

Since the focus is on disease control and containment, small pharma companies will stand to benefit.

Mr. Mohanty said since the Union Budget has laid a lot of emphasis on infrastructure building and it will create a demand for the steel industry, especially PSU steel plants such as RINL.

“There is lot of focus on affordable housing and other infrastructure such as road and railway network. This will create a demand for steel, which we have been missing since last one year. It will act as a stimulus to the steel industry, especially after experiencing a bad phase during the pandemic,” he said.

Mr. Mohanty added that some concession or reduction in raw material prices such as iron ore and coal, would have been even better. “We have seen a rise in coal prices by over $50 in just 10 days and this has hit the production cost. “But with the increase in demand, we now have a chance to overcome it,” he said.

However on the strategic disinvestment proposal of RINL, Mr. Mohanty said that it was too early to comment, as things will be clear only when the full budget document is received.

Chairman of Visakhapatnam Port Trust K. Rama Mohana Rao said that the announcement of allowing PPP (public-private-partnership) in major ports, would benefit VPT, as new and modernised berths would come up, facilitating more handling of different types of cargoes.

Baargav Duggurala, Chair, Young India Visakhapatnam Chapter, said that extending the tax holiday and exempting capital gains for one more year to startups would encourage them in the city.

Ballot papers titled ‘2020 election’ to be used in GP poll