In Gorakhpur, Uttar Pradesh, Rahul Singh, son of a farmer studying in 12th, has made an eco-friendly bike. This bike is so smart that it emits neither smoke nor any kind of noise nor pollution. This bike is also very sensitive in terms of safety. If you try to sit without a helmet, it will not start. It has a sensor installed. Neither will there be any worry of repeatedly putting petrol in it. At the same time, there is no need to re-charge its battery once charged. The more it fills, the more it will be charged. 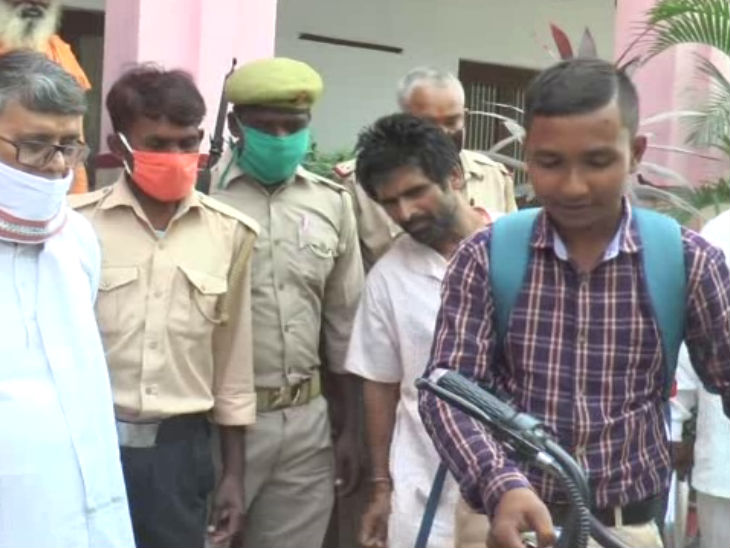 Student Rahul explains the merits of the bike in Gorakhnath temple.

Will not start even without lifting stand
Rahul Singh, son of farmer Sanjay Singh, originally from Bijapar Asman Chapra village of Maharajganj district, is just 17 years old. He is a Class 12 student at ABC Public School, Divyangar, Gorakhpur. He has designed this bike (Bicycle) at the Design and Innovation Center of Madan Mohan Malviya University of Technology. Rahul told that if you try to start drinking alcohol and alcohol, then it will not start. The wheels will lock. He said that even if the stand was not picked up by mistake, it would not be a bicycle cycle.

Rahul told that it can fill the furrots in 25 to 45 speed. Can weigh up to 1.8 quintals. It will cost 15 to 20 thousand rupees. He said that it is completely eco-friendly. No fuel is used in this. This makes it completely free from air pollution. Also, it will not cause noise pollution. That is, there will be no sound even when the bicycling starts and runs.

Rahul says that it is censored. Are preparing to patent it and commercially bring it to market. He has been selected for the India International Science Festival. He explains that before that he invented a machine for energy conservation, a drone for spraying medicine in the field, with solar innovation. He said that in addition to this, he made a tractor to plow the field, which can plow the sugarcane field.

Administration in collaboration with CM in studies
Dwarka Tiwari, office secretary of Gorakhnath Temple, says that Rahul is a promising boy and young scientist. He has made many inventions. He said that the administration is also cooperating with Chief Minister Yogi Adityanath in its studies. He said that it is constantly being encouraged. He said that apart from bi-cycles, he has also invented sanitized tunnel, farm plowing machine and many other inventions.

Uttar Pradesh Ballia Dm Hari Pratap Shahi Carry Boats On His Shoulder | The DM of Ballia landed in the drain, the boat stuck between the watercourses, with the CDO lifted on the shoulder and proceeded and completed the journey

Varanasi Road Accident: Truck Driver Killed In Accident In Varanasi Raja Talab Highway | Driver and student injured in collision of two trucks, one of them in critical condition

Voices from ground Ziro: Against Chinese claims, it’s time for the Arunachali frontier to be heard

It’s been relentless – Beijing’s unbridled propaganda offensive against India since the bloody clash in the Himalayas. Threatening rhetoric on