All the preparations were done for social distancing and sanitizing before the show started in theaters of Lucknow.

The Uttar Pradesh government has approved the opening of the cinema hall with a new guideline amid the epidemic. The Cinema Hall opened from Thursday after seven months due to a corona infection. However, not all cinema halls are open yet. The cinema halls were closed from 20 March. Arrangements for seating of 50 percent of the audience have been made in these cinema houses. Leaving a chair, the audience has to sit. Toilets have been provided with sanitization, napkins. 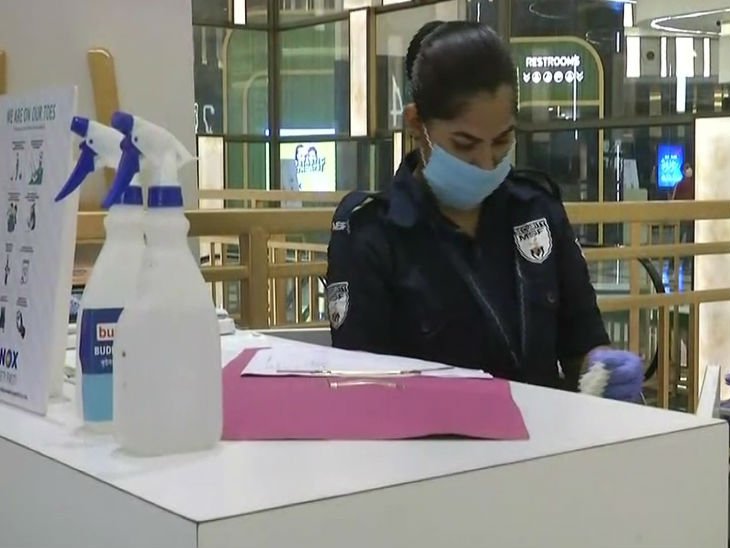 Sanitizers have also been arranged outside theaters.

Preparations were made in the cinema halls to fully follow the rules of Kovid-19. In the web cinema, sanitizing the chairs, cleaning with vacuum cleaner, changing the cover and floor mats are also new. Kovid-19 rules have also been posted in the mall. At the moment, Satyam Cinema has not considered opening.

Movie theaters set to open in Prayagraj from today with 50% operating capacity.

“All procedures of distancing, wearing masks are compulsory. We will help people get a safe entertainment experience. We’ll provide masks to anyone in need as well,” says manager of PVR Cinemas pic.twitter.com/WNQUqnZSP6

Currently only released films will play

Till now, only showrooms were operated in the mall but, due to not having customers, they were not being sold. His face too has glowed. At the same time, the staff of the cinema hall was also not coming. The preparations were finalized by calling them as well. GM Bhupendra Wali of Web Cinema said that only the previously released Malang and War films will be played.

Guidelines issued by the government

Thermal screening and sanitizer at the entry points of the auditorium and a circular sign shall be arranged in line with the physical distance standard for lined entry and exit. Only persons without symptoms of Kovid will be admitted. Adequate time spacing will be maintained between the two shows in a single screen cinema hall and between every show in the multiplex and between the interval period and the end of the show.

Emphasis on advance and online booking

Advance booking or online booking will be done as soon as possible. Touchless transactions, QR codes, scanners will be arranged at the booking window. Phone numbers will also be taken at the time of booking tickets for contract tracing. At the end of the show, there will be an arrangement to leave the audience together and go in a systematic manner, following the standard of physical distance.

The guideline states that individual show intervals should not be done simultaneously. Lobby and washroom should not be crowded during the interval. Food and beverages should be kept in sufficient numbers at the sales counter. Online payment should be made as far as possible while maintaining physical distance at the counter.

Farmers Protest In Ayodhya Saryu River For Compensation Of Land Acquired For Airport | For proper compensation of land, farmers demonstrated in Saryu standing, said – If the administration bothers then they will commit self-immolation