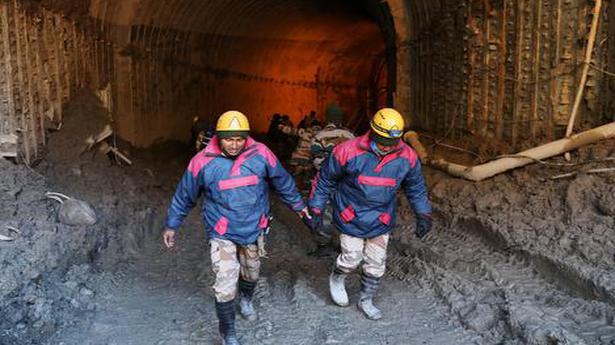 The focal point of the rescue operation for the last over four days remains the more-than-1.5-km-long “head-race tunnel” of the total 2.5 km of the tubular structure

Rescuers launched a drilling operation on Thursday at the Tapovan tunnel, where an estimated 30-35 people have been trapped since a flash flood battered various villages and hydro-power projects in Uttarakhand’s Chamoli district, claiming 34 lives, while about 170 people are still missing.

The focal point of the multi-agency rescue operation for the last over four days remains the more-than-1.5-km-long “head-race tunnel” of the total 2.5 km of the tubular structure, as every passing minute is mounting concerns over the safety of those trapped inside.

“A drilling operation has been started by the rescue teams at 2 am to peep into the slush-flushing tunnel that is about 12-13 metres below,” Vivek Kumar Pandey, the spokesperson for the lead rescue agency, Indo-Tibetan Border Police (ITBP), said in Delhi.

As the continuous flow of slush and silt remains a major obstacle between the rescuers and those trapped inside the tunnel, a boring operation by a huge machine is being undertaken to see if this problem can be addressed in a different way and the teams can go further deep inside, he said.

Till Wednesday, about 120 metres of slush from the mouth of the tunnel was cleared and those trapped inside were stated to be located somewhere at the depth of 180 metres, where the tunnel takes a slip or a turn.

“More slush and water coming from inside the tunnel is making the way ahead difficult,” Pandey had said on Wednesday.

ITBP chief S S Deswal told on Wednesday that his men and those from other agencies will continue with the rescue operation till “any length of time” or till a logical conclusion is arrived at and the trapped workers are located.

“My boys are determined to locate those trapped…,” the ITBP director general had said in Delhi.

He had expressed hope that those trapped inside might be safe with the help of possible air vents in the structure.

“No doubt that those trapped or missing inside the tunnel must be in a bad situation as they have had no food and water for almost five days now.

“But there is hope against hope that they are surviving somehow as the temperature inside the tunnel is about 20-25 degrees Celsius and some oxygen is possibly available to them,” an officer working on the ground said.

Workers at the 480-MW Tapovan-Vishnugad hydel power project of the National Thermal Power Corporation (NTPC) got trapped soon after the swollen Alaknanda river came hurtling down and washed away everything with its furious speed on Sunday.

Central, Tiruchi among stations yet to comply with green norms