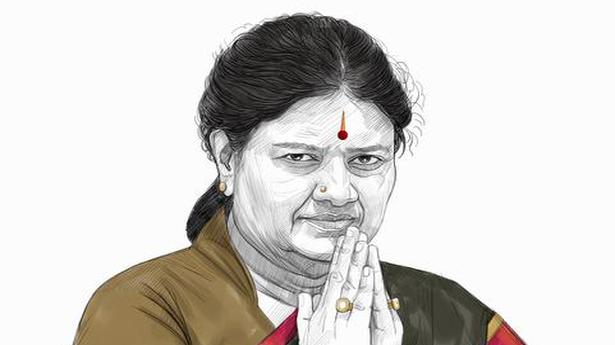 There was a time when no one bothered to find out who V.K. Sasikala exactly was. There was enough information for the public to know that she lived in a penumbra of secrecy in the Poes Garden residence of the late Jayalalithaa, her friend and associate. Not yet considered a public figure, Ms. Sasikala was known vaguely by the growing body of anecdotal evidence about her land-buying spree, her unwholesome influence over the life and fortunes of Jayalalithaa, and the unexplained power and control she wielded in the All India Anna Dravida Munnetra Kazhagam (AIADMK).

Now, fresh from a four-year term in prison, following her conviction for her role in the amassing of unexplained wealth during Jayalalithaa’s first term as Tamil Nadu Chief Minister between 1991 and 1996, Ms. Sasikala’s personality, her motivations and aspirations draw attention and analysis.

Besides her proximity to Jayalalithaa, she may have owed her political clout to her husband, M. Natarajan, a former government public relations officer who fancied himself to be a political king-maker and was even seen by many as the handler of a large body of party legislators. Outside party affairs, especially whenever Jayalalithaa was Chief Minister of Tamil Nadu, she is believed to have exercised effective control over the bureaucracy and the police force. Many members of her Thevar community were appointed to key positions. Over the years, she was selecting party candidates in elections and making key party appointments.

Ms. Sasikala is one of the daughters of C. Vivekanandan, a medical compounder at Thiruthuraipoondi, an agrarian town in central Tamil Nadu. Her marriage to Natarajan in 1973 was a turning point. A video rental agency that she ran in the 1980s also got some assignments for video-graphing public events. She was introduced to Jayalalithaa, then an emerging leader in the AIADMK after party founder M.G. Ramachandran inducted her into politics. Ms. Sasikala’s firm was engaged to record Jayalalithaa’s political meetings, and this relationship turned into a lasting bond. Over the next 30 years, Ms. Sasikala was to emerge the country’s best known extra-constitutional authority in any regime. Natarajan and Ms. Sasikala were Jayalalithaa’s close confidants after MGR’s death in 1987. However, when Natarajan was cast away by Jayalalithaa and asked never to enter her household, Sasikala chose to stay back with her friend rather than go with her husband.

It was her relationship with Jayalalithaa that has kept Tamil Nadu politics in a welter of curiosity for decades. It was an unbreakable, yet, turbulent bond. In 1995, Jayalalithaa declared that V.N. Sudhakaran, a nephew of Ms. Sasikala, was her ‘foster-son’. She arranged a wedding for him with a bride drawn from the family of legendary actor Sivaji Ganesan, an event that was possibly the single biggest reason for her party’s cataclysmic defeat in 1996. The ostentatious wedding took place in Chennai roads with a massive and opulent display of jewellery, and drew thousands of people to a feast that took place on several acres of land. The expenditure on the occasion was part of the evidence in the ‘wealth’ case against the duo.

Soon after the 1996 electoral debacle, when even Jayalalithaa could not win her own seat, there was a clamour from party cadre for the leader to distance herself from Ms. Sasikala. Jayalalithaa obliged them by publicly disowning her, as well as Mr. Sudhakaran.

The disowned foster son was later to go to jail as an abettor in the ‘disproportionate assets’ case. Meanwhile, the family’s fortunes plummeted. V. Bhaskaran and T.T.V. Dhinakaran, other nephews of Ms. Sasikala, were arrested by the Enforcement Directorate in different cases of foreign exchange violations. The 1996 disassociation did not last long, and Ms. Sasikala was reinstated in the Poes Garden residence soon.

There came a more serious and potentially long-lasting break in their ties. In December 2011, Jayalalithaa got wind of what she believed was an act of betrayal by the Sasikala family, possibly an attempt to gain direct control of the party. Jayalalithaa gave the marching orders to many members of the Sasikala family from the party, save one. The list included Sasikala and Natarajan, the former’s sister, brothers and nephews, and the latter’s brothers and several other relatives of the couple. This time, party leaders were certain that the disassociation with Ms. Sasikala was permanent, and there was no chance of a rapprochement. However, this too turned out to be a sham, as Ms. Sasikala was rehabilitated after a little over three months.

It was no surprise then that much of the party turned to Ms. Sasikala for leadership not long after Jayalalithaa’s demise in December 2016. Whether it was orchestrated by her family is unclear.

However, several leaders, including Ministers, pleaded with her to take over the reins. She was declared party general secretary, until a formal election was held as per the party’s constitution. She was also elected leader of the AIADMK legislature party, a move that would displace stand-in Chief Minister O. Panneerselvam, who was sworn in at midnight hours after the party’s leaders death.

Events after Jayalalithaa’s death pitchforked Ms. Sasikala into the limelight. The public had not even heard her voice before, even though she was known to hold alliance and seat-sharing talks on behalf of the AIADMK for long. An emotional speech and followed by television interviews gave the first clue to her aspirations. It was clear that she wanted to step into Jayalalithaa’s shoes both in the party and the government. She had claimed that as Chief Minister, she would act exactly as Jayalalithaa did. She never got a shot at the post, as the then Governor did not invite her to form the government until the court verdict was out. She got Edappadi K. Palaniswami to lead the legislature party, and he was sworn in CM days after she went to prison.

Now that she has served out her term, Ms. Sasikala is expected to seek to re-establish her power and influence over the AIADMK. Some analysts have begun to speculate that she returns as a redemptive figure to change the AIADMK’s fortunes, now labouring under the anti-incumbency built over two successive terms. But of equal importance in the ultimate reckoning would be the undisclosed opinions of many party leaders.

Whether they would give up the considerable freedom they had enjoyed over the last few years in the absence of any overbearing leader or firm up their political careers by paying obeisance to Ms. Sasikala is a key question. While only an election can determine how far her presence will make a difference — she is disqualified from contest for six years — few will forget that she was widely seen as a negative force that cast a shadow on the Jayalalithaa governments.

Not all those who crave recognition as a leader’s legatees achieve it. Would one so closely associated in the public imagination with amassing wealth and power make the cut?

Why SC’s ‘Bail is the Rule, Jail is the exception’ not followed: Chidambaram

Hostel for KK students in Bengaluru