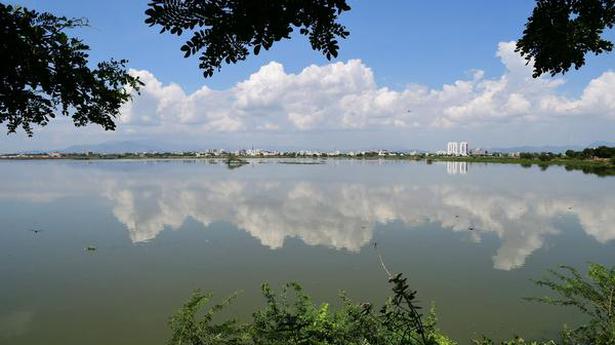 The Vandiyur tank, one of the largest tanks in the city, is a sight to behold. Following the recent rain and release of water from Periyar Main Canal, the tank is filled up to 90% of its total capacity.

“All these steps ensured that rainwater was effectively stored in the tank. The water released in Periyar Main Canal for irrigation is also sometimes released into the tank,” he added.

The DHAN Foundation, in association with HCL Foundation, has taken up a project to revive the Vandiyur tank.

N.Venkatesan, Programme Leader, DHAN Vayalagam Tank Foundation, said that Prosopis Juliflora was removed from the Vandiyur and its chain of tanks as part of the revival programme. “In the 9th branch of the Periyar Main Canal, which releases water to Vandiyur tank, garbage was cleared and it was completely desilted,” he said.

D. Raghavan, President of Gomathipuram – Thendral Nagar Residents’ Welfare Association, said that storage of water in the tank will help to increase the groundwater table in the neighbouring areas.

“Water was stored in the tank for many months last year. As a result, the residents of Gomathipuram spent very less money on purchasing water from private water tankers,” he said.

In addition, the tank is an important biodiversity spot which attracts many birds, said Madurai-based ornithologist T. Badri Narayanan, who is an ophthalmologist by profession.

Mr. Raghavan added that the officials can consider the possibilities of directing water from Vandiyur tank to Melamadai Oorani.