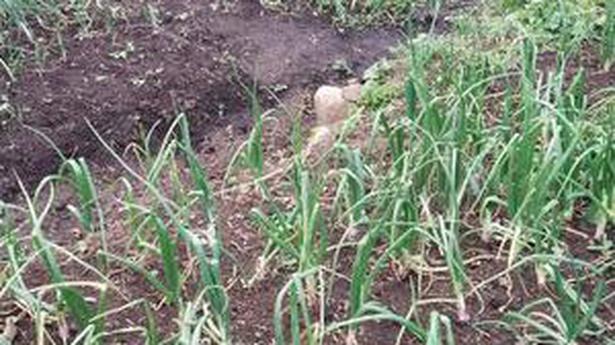 
Vattavada, the largest cool season vegetable cultivating village in the State, has added one more crop to its kitty with the successful trial cultivation of big onion.

The trial cultivation was done in 1.5 acres in September-October and the crop is nearing harvest, Principal Agriculture Officer V.T. Sulochana told The Hindu.

She said the pH level of the soil was 5.5 at Vattavada and onion required pH level of below six for congenial growth. Usually, farmers in Vattavada cultivated traditional crops such as potato, cabbage, cauliflower, carrot, and beans. This was the first time big onion was successfully tried there.

She said onion required mild climate free of heavy rainfall. It was possible to cultivate two seasonal crops there. The next sowing season is April-May.

The soil condition and climate were suited for onion, she said adding that there was comparatively slow growth during the nursery stage. The growth picked up after transplanting and once nutrients were added.

The trial cultivation of big onion was launched under the Subhiksha Keralam scheme. Seeds of the Panchagavya and Prema varieties were arranged from Maharashtra, one of the main onion cultivating areas in the country.

Onion required 80 to 150 days of growth depending on soil and climatic conditions.

Officials said unexpected rain in January and continuing mist had affected trial farming and the yield was expected to be better in future. The adverse weather spell had affected all crops in the villages of Vattavada and Kanthallur.

Agriculture Minister V.S. Sunil Kumar said the department had plans to expand the cultivation of big onion as it had been found successful at Vattavada. The seeds suitable for the climate would be arranged from the National Seed Production Centre.

Garlic is a major crop at Kanthallur and Vattavada and it is hoped that onion will also become one of the main crops at these places.

The State produces 15 lakh tonnes of vegetables and the government is set to open a seed nursery to ensure distribution of vegetable seeds.